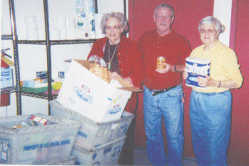 Frances Washburn, left, along with Darrell Woodall and Alice Wood show off donations made to the "Stamp Out Hunger" food drive last year. To help "Stamp Out Hunger" locally, residents are asked to place bags of non-perishable food items by their mailboxes on May 9 for letter carriers to pick up. All donations will be made to the Putnam County Food Pantry.

With the help of local letter carriers, Putnam County residents will be given an opportunity to easily donate food for needy families in the community.

For the seventh year in a row, the Greencastle post office has joined the National Association of Letter Carriers in the "Stamp Out Hunger" food drive.

On May 9, residents can place a bag filled with non-perishable food items by their mailbox for the letter carrier to pick up.

"Some of the carriers will be wearing T-shirts with the Stamp Out Hunger logo instead of their regular uniform shirts," Briones said.

All items will then be taken to the post office, where volunteers will be on hand to help sort the food into bins before delivering it to the local food pantry.

A donation bin has been placed in the lobby of the post office, 8 E. Walnut St., for anyone who would like to donate early. Reminder cards will be placed in all postal customers' mailboxes May 6.

In 2008, Putnam County collected 3,508 pounds of food during the annual drive. That number is a reflection of the increase in donations throughout the years.

It seems with the end of the school year approaching, sorority members clean out kitchens/pantries and donate most of the unwanted food items.

Items such as canned meats and fish, canned soup, pasta, vegetables, cereal and rice can be donated. It is requested expired items not be given for donation.

Stamp Out Hunger is a national food drive entering its 17th year. Last year, a record 73.1 million pounds of food was collected nationally during the one-day food drive.

The best part is all community donations stay in Putnam County.