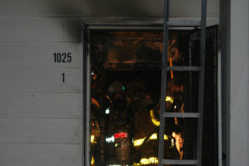 Fire crews work on overhauling, or checking for hot spots, in an apartment at 1025 S. Fillmore Road following a grease fire shortly before 8 p.m. Wednesday. No injuries were reported.

"It was a grease fire," said Fire Chief Bill Nugent.

The occupant, Rachel Lucero, was home when the fire began. Lucero and her pets, a dog and cat, and the occupants of two other adjoining apartments escaped without injury.

However, Lucero's cat was having difficulty breathing when found near the apartment. Operation Life assisted with some oxygen to the animal before veterinarian Jason Huff arrived on the scene.

Lucero's apartment is part of a triplex owned by Bill Earl and Russ Hessler, doing business as KZ Properties in Greencastle. The other two dwellings suffered smoke damage and crews checked carbon monoxide levels in both before leaving the scene.

Red Cross was on hand to provide places for the three families to stay for the night.

There was an estimated $30,000 in damages, but should not be a total loss. The total estimate included contents of the apartment in which the fire broke out, said Nugent.

Crews were back in service at 10 p.m.