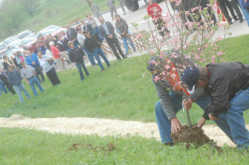 The City of Greencastle celebrated local veterans and the city's commitment to keeping the green in Greencastle during a Veterans Memorial and Arbor Day ceremony Saturday morning.

Thirty-four trees, all in memory or honor of local veterans, were recently purchased by friends and family members of the veterans and planted by city employees along Veterans Memorial Highway. There are now 215 memorial trees beside the roadway.

Pam Louks, coordinator of the Indiana Deparment of Natural Resource's Community and Urban Forestry Department, said 64 of Indiana's 568 cities and towns have been designated as Tree Cities by the DNR. This marks Greencastle's 10th year as a Tree City.

"This makes your community very special," Louks said. "I commend everyone who's ever been involved in making it happen."

Ralph Lane, who works for Sen. Richard Lugar's office and is also president of Greencastle's Tree Board, said trees are more beneficial than most people realize.

"It's important to remember that trees soak up a lot of water," he said. "With all the rain we've had, it would be good if you could all plant one right now."

"It not only recognizes (the veterans') service, but also helps to develop a very beautiful spot in Grreencastle," he said. "We need to honor tradition and continue to support the planting of trees."

R. Martin Umbarger, major general of Indiana's National Guard, was also on hand for the ceremony.

"Small town America -- that's what makes us so strong and gives us roots," he said. "I look at your faces and I see how patriotic you are, and I'm very proud of our nation and proud of the Midwest."