May is VFW Buddy Poppy Month 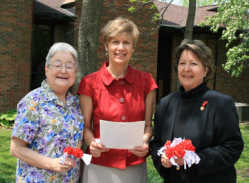 Peggy McClaine and Margaret Bruner with the Veterans of Foreign Wars Women's Auxiliary met with Greencastle Mayor Sue Murray recently for the signing of a proclamation declaring May as VFW Buddy Poppy Month.

Since 1922, the annual distribution of Buddy Poppies by the Veterans of Foreign Wars has been a highly respected program serving disabled war veterans and their families.

Greencastle Mayor Sue Murray recently signed a proclamation declaring May as VFW Buddy Poppy month. On Saturday, May 16 the Ladies Auxiliary for VFW Post 1550 will offer Buddy Poppies at Wal-Mart from 9 a.m. to 4 p.m.

This year marks the 65th anniversary of the charter for the Ladies Auxiliary for Post 1550 in Greencastle.

"We're proud to be a part of the VFW and extremely grateful for all of our members who donate so much of their time toward helping veterans, their families and the community," said Peggy McClaine, president of the Auxiliary.

"Without the support of so many, we would not be able to raise the money needed to continue with all the necessary programs that aid the deserving men, women and children in the national homes and hospitals in Indiana and across the nation."

Since 1922, the Buddy Poppy has been an integral part of the VFW community. As VFW's official memorial flower, the poppy represents the blood shed by American service members. It reiterates that the VFW will not forget their sacrifices.

The poppy movement was inspired by Canadian Army Col. John McCrae's famous poem, "In Flanders Fields." Poppies were originally distributed by the Franco-American Children's League to benefit children in the devastated areas of France and Belgium following WWI.

In 1922, the VFW conducted a campaign and got poppies from France. Members soon discovered it took too long to get the blooms in France and came up with a better idea. Disabled hospitalized and aging veterans could make the paper flowers and ship them out to members for distribution.

The poppies are assembled, tied in bunches of ten and packed into boxes of 500, 1,000 or 2,000 for shipment to the posts and ladies auxiliaries.

The VFW pays the disabled veterans for the work. In most cases, this extra money provides additional income for the worker to pay for small luxuries that make hospital life more tolerable.

Poppy assembly is also used as a therapy program to provide exercise for fingers and hands crippled by wounds, disease and the effects of old age.

All proceeds from distribution are used for veteran's welfare or for the well being of their needy dependents and the orphans of veterans.

In addition to the many programs supporting veterans, the VFW and the Auxiliary offers members other benefits such as cancer grants, continuing education grants and youth scholarships. If you are interested in helping or becoming a member, contact the VFW Post at 653-3018.