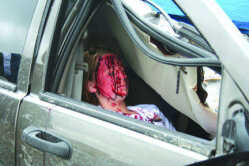 CLOVERDALE --  It's the type of lesson parents hope their child doesn't learn by experience.

Teenage drunk driving is the cause for one-quarter of motor vehicle accidents. One teen is killed every 60 minutes due to teen drunk driving.

On Thursday, Cloverdale High School's parking lot became the scene of a mock two-vehicle accident with injuries and a fatality, which was caused by a teenage drunk driver. Students watched as emergency personnel worked to rescue fellow classmates from the horrific wreckage.

The intoxicated teen driver, James Green, and his passenger Allie Franklin were given field sobriety tests by officers. Once it was determined the pair failed, they were handcuffed and placed in the back of a squad car.

As for the rest victims, PHI Dove Flight took Jenna Lewis, who portrayed the passenger in the front seat of a Jeep who was not intoxicated; Putnam County Operation Life took both passengers of the four-door sedan driven by Green, played by Janna Oxford and Daina Pina; and one young girl lost her life.

Elizabeth Wiley played the driver of the Jeep, who was killed in the mock accident. Wiley's character was not intoxicated when the crash occurred, yet hers was the highest price to pay.

The scene may have been staged and the blood fake, but the lesson was real.

Zach Bowers, Putnam County Operation Life manager, said the message he wanted to send was what could happen when poor choices are made.

The day didn't end with the accident site. Students filled the gymnasium to listen to Corey Robinson explain what happened during the accident scene. Putnam County prosecutor Tim Bookwalter followed with a Power Point presentation.

Also hoping to get the high school students to understand the risks associated with drinking and driving was Brittany Nees, who shared her personal experience.

In addition, Putnam County coroner Thomas Miller was on hand with a Power Point presentation.