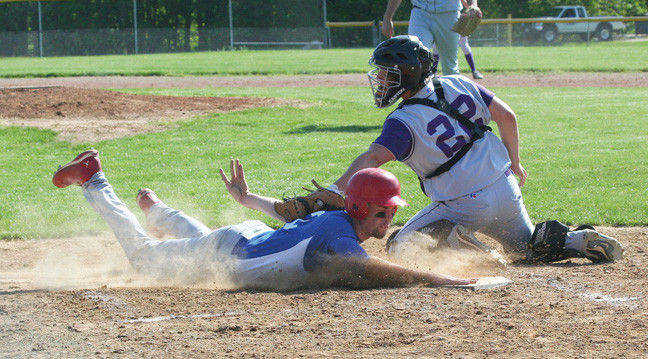 After a slow first couple of innings, Monday's matchup between South Putnam and Greencastle quickly turned into a slugfest. The Eagles scored multiple runs in the final two innings to defeat GHS 14-3 in five innings.

The teams entered the fourth inning tied 1-all, but that's where the Eagles took flight. South connected on six home runs in two innings, with a duo blasting two each.

The Eagles took to the plate in the bottom of the fourth and didn't waste any time getting things going. Josh Flory turned on the third pitch he saw and sent a shot over the right field wall to give SPHS the lead. No sooner had the crowd's roar died down from Flory's shot, John Spencer drove a ball deep to left field and brought South Putnam's fans to their feet once more.

"Man, the guys are swinging the bats well," South Putnam head coach Troy Burgess said. "They hit the ball a few times. I guess it's amazing when you get some nice weather and get some baseball weather; the best comes out in everyone I guess. The guys come out swinging the bats and that was nice to see tonight."

South might have been connecting well at the plate, but GHS head coach Troy Remsburg thought his team did little to help its own cause. The Tiger Cubs struggled on the mound and the Eagles were able to capitalize.

The Tiger Cubs mounted their own charge in the top of the fifth with Graham Shuee getting things going for GHS. After reaching on a single, Shuee crossed the plate after Pat Richardson sent a double to right field. After moving to third, Trey Ford was brought home by a sacrifice fly by Justin Bartrum.

GHS had a chance to put another run on the board when Jesse Vermillion hit a long drive to right field, but Pat Richardson hesitated at third, which stranded him for the inning. The Tiger Cubs left 10 runners on base in the contest.

"When we had the opportunities, we just left a lot of runners on base today," Remsburg commented. "In that one inning, we had three strikeouts in a row. If we could have got some runs that inning, it could have been a different game; it just kind of took the wind out of our sails."

If that didn't take the wind out of their sails, the performance the Eagles put forth in the bottom of the inning did.

Eagle first baseman Derek Dean opened the bottom half with a blast to right field and was followed by Spencer's second long distance offering of the night. Drew Cash and Cameron Chestnut scored to bring the Eagles within two runs of closing the game early.

Down to the last out and Grant Zimmerman and Brayden Freeman sitting on first and second, Dean came to the plate for his second appearance of the inning and left little doubt the game was over. Dean connected on a shot that cracked off his bat, took aim and landed over the fence to give South the 14-3 victory.

The Tiger Cubs received doubles from Trey Ford and Richardson, but continued to struggle at the plate. Remsburg continues to search, but still hasn't found what has eluded his team.

"We've tried switching the lineup around, if someone is struggling, have someone bat for them and everything we've tried this year nothing's seemed to work yet," he acknowledged. "We've had three games where we've hit the ball good and it's been six games ago when we hit the ball good.

"There's a magic switch, but I haven't found it yet. I hope we do tomorrow night and I hope we do Saturday," Remsburg added.

Saturday was on the mind of Burgess as well. All four county schools will converge on Greencastle High School for the 2009 Putnam County Tournament and Burgess believes the hot start to the week will benefit his team Saturday.

"That's the nice thing, not only were they hitting home runs, they were hitting the ball hard," Burgess said. "We put the ball in the hole and got on base. We're hitting the ball well right now, that's a day-to-day thing and we hope it keeps going.

"It's a big week for us. I guess if we're going to get the bats going, it's a good week for it," he commented.

Greencastle will travel to Edgewood Thursday at 5 p.m., while the Eagles will next be in action in the Putnam County Tournament Saturday at 10 a.m.

Next game -- Greencastle will travel to Edgewood Thursday at 5 p.m., while the Eagles will next be in action in the Putnam County Tournament Saturday at 10 a.m.