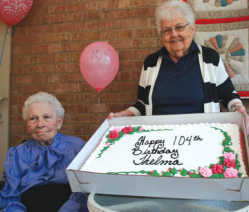 Thelma Varvil, left, celebrated her 104th birthday Monday at Asbury Towers, where she has lived since 1998. Among her birthday guests was Beverly Wagoner, who worked as a nurse at Asbury for several years.

Time has robbed Thelma Varvil of many things, but she still has her spirit.

On Monday, Thelma, who lives at Asbury Towers Retirement Community celebrated her 104th birthday. Her friends and neighbors gathered to honor her.

"I worked at Asbury Towers for seven or eight years, I guess," said Beverly Wagoner, who was a nurse at the retirement community. "Thelma still has that same wonderful smile and that sparkle in her eyes."

Thelma moved to Asbury Towers' residential living area from Indianapolis in 1998, and in 2000 moved to the skilled living unit. Beverly said Thelma especially enjoyed it when people brought in babies, kittens and dogs.

Thelma would also sit behind the nurses' desk with Beverly, which was technically against the rules. But Thelma was so lovable, Beverly said, she couldn't shoo her out.

"She doesn't age," Michelle said. "She has beautiful eyes and beautiful skin."

Thelma graduated from Reelsville High School. She and her husband Orland, who died in 1979, had two children, Patty and Robert. She was a homemaker and stay-at-home mother.

Although age has taken its toll on Thelma's hearing and memory, she sat in her wheelchair on Monday smiling, obviously aware that a party -- complete with lots of balloons and a very large cake -- to celebrate her special day was in the making.

"I'm sure she knows something is going on," Michelle said. "She wouldn't be smiling if she didn't."