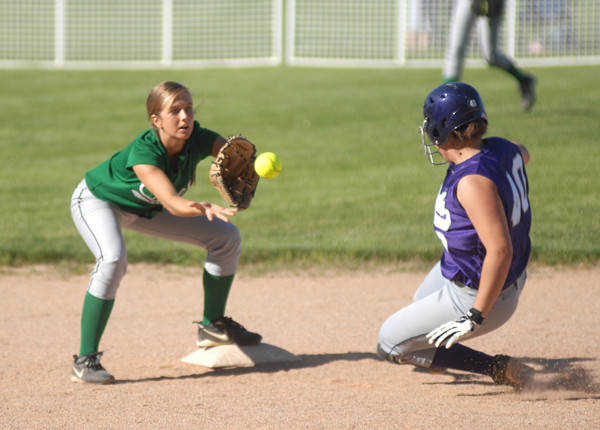 Sierra Patterson hits the dirt before Cloverdale's Kayla Shepherd gets the ball for the tag in Tuesday's WCC match up at Greencastle.

For the third time in two days, Cloverdale has played Greencastle.

And for the third consecutive time, the Lady Clovers have laid the Lady Tiger Cubs to rest.

Cloverdale defeated Greencastle 15-4 Tuesday and up until the seventh inning it was a close game.

Going into the top of the seventh frame, Cloverdale held a slight edge over the Lady Tiger Cubs, 5-2, but by the end of the frame that slight edge turned into a landslide. Cloverdale scored 10 runs on five hits in the top half of the seventh frame and went around the batting order one-and-a-half times. Mallory Miller gave up seven runs on five walks two hits before getting replaced by Kayla Downing.

"Mallory's been strong for us and she has worked through some adversity having to pitch a lot of innings over the season and she is allowed to have an off night," GHS Coach Robin Knapp said. "And it's hard that the one night she is off she doesn't have the defense to back her up."

All in all, Miller gave up 13 runs on 13 hits and someone could credit that to her having an off night, or Cloverdale was just in it's zone Tuesday.

Cloverdale banged out 16 hits and nearly every Clover got a hit.

Martika Byrd was the big stick of the night. Byrd went 3-for-3 and hit the first RBI of the evening. Also coming up big for Cloverdale were Kristin McCammon, Whitney Bond and Breegan Andersen. McCammon went 3-for-4 with an RBI and a walk while Bond went 2-for-3 with three RBIs and Andersen went 3-for-5 with two RBIs.

On the defensive side of the game, it wasn't Paige Gutierrez that was the foundation for the Clovers like it usually is; it was a total team effort. Gutierrez