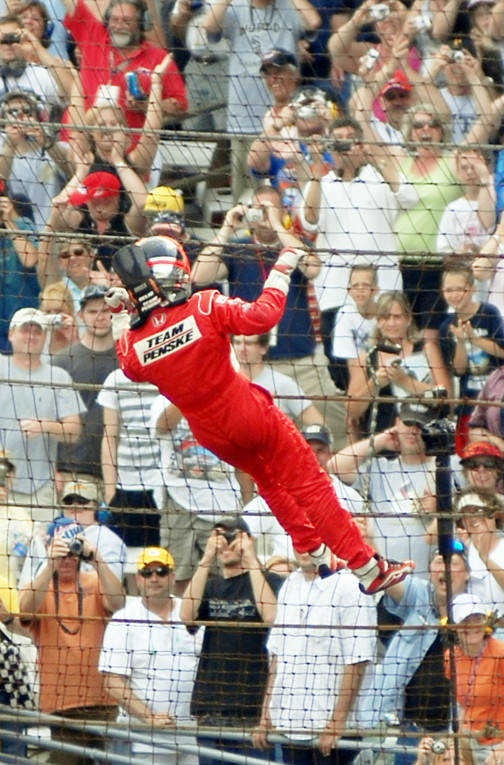 INDIANAPOLIS -- An emotional Helio Castroneves crossed the finish line for the third time in his career at the Indianapolis 500 Sunday. The win gives owner Roger Penske a record 15th win at the Brickyard.

"This is incredible," Castroneves exclaimed. "I think my tears speak for everything. What a great team. I just have to thank, first of all, the Lord for giving me this opportunity, to be strong, to have a family that I have."

After a few kind words about his owner and sponsors, he acknowledged his legions of fans that the racer stated gave him strength when he had none.

"And obviously the fans," he said. "You guys don't understand. You guys kept me strong. You guys are the best. I'm honored to have fans like you. Thank you so much.

The Penske driver led 66 laps in Sunday's race and joined Bobby Unser, Johnny Rutherford, Mauri Rose, Wilbert Shaw and Louis Meyer as three-time winners. Next year he will try to join the ranks of Al Unser, A.J. Foyt and Rick Mears who have four Indy wins under their belts.

"You guys are awesome," Castroneves shouted to his crew after the race. "Thank you God, thank you."

The win was a perfect way to cap a turbulent beginning to 2009. The racer had faced tax evasion charges that could have resulted in a maximum 35-year prison sentence. Castroneves was acquitted on April 17 and a conspiracy charge was later dropped.

Castroneves proved too much down the stretch for Dan Wheldon and Danica Patrick. The duo stayed close at a restart late, but Castroneves was able to pull away and win by a comfortable two-second margin.

Patrick began the day in 10th position and looked poised late to make a run at becoming the first woman to win at the Brickyard. Patrick was able to say close to the front with quick pit stops and restarts, but Wheldon was able to say in front to secure second place.

The race began on a down note when Marco Andretti and Mario Moraes got together on lap one, sending both racers out. The two young guns were more than disappointed and had very different opinions on what had taken place.

"It's totally disappointing," Andretti said. "I should have been smarter than that. That kid (Moraes) is in way over his head with where he is now. I'm sitting next to him, and he just drives up into me."

Two other incidents brought gasps from the crowd.

On lap 98, fan favorite Tony Kanaan slammed hard into the wall on the backstretch and continued into turn three. Then on lap 173, Vitor Meira and Raphael Matos touched wheels, sending Meira careening into turn one nose first. Safety crews pulled the racer from his car and transported the driver to Methodist for observation after complaining of lower back pain.

After crossing the yard of bricks for the win, Castroneves had a brief discussion with safety personnel before finally emerging from his car and scaling the fence to the raucous applause of the crowd.

"Basically, it was a long race," Castroneves said. "We were just taking it easy. It was good, actually, because behind I knew what I needed to do.

"But once I got to the front, it was never look back," he explained. "What a day. This place is magical."

At The Indianapolis Motor Speedway