GHS succumbs to No. 3 West Vigo 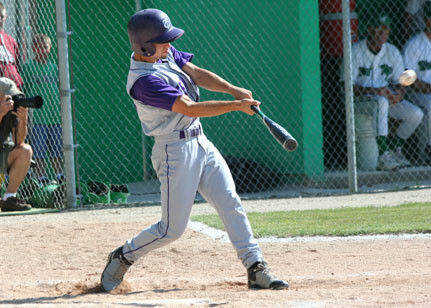 GHS senior Justin Bartrum send a shot to the fence during the second inning of Saturday's sectional matchup with West Vigo. The Tiger Cubs fell to the Vikings 9-2.

WEST TERRE HAUTE -- On Saturday, the Greencastle baseball team found out first hand why the Vikings of West Vigo are ranked No. 3 in Class 3A. The Vikings defeated GHS 9-2 in seven innings, bringing the Tiger Cubs' season to an end.

It was a rough start for Greencastle and things didn't get much better.

Jordan Pearson opened for the Vikings and reached base after a drive to left-center field. Next batter Cameron Fagg put the game's first run on the board, bring home Pearson with a shot to left field.

Two batters later, the situation went from bad to worse.

With Fagg sitting on base, Jeremy Lucas sent a laser shot over the left-center field wall for a two-run shot. When the inning was over, West Vigo has seized a 4-0 advantage.

"They played hard," GHS head coach Troy Remsburg said of his team. "When you're playing a team that fundamentally sound, when you don't have that many hits and you have a few little errors, you're not going to beat them like that. We played respectible, yeah we started in the hole there, but we didn't give up and fought back and got a couple runs."

Those runs didn't come until fifth inning when Justin Bartrum and Jesse Vermillion scored, cutting the gap to 8-2 in favor of the Vikings. Greencastle had its chances earlier, but the sound fundamentals of West Vigo cut those hopes short.

One of those opportunities came back in the second inning when Bartrum blasted a shot to the fence, but by the time he slid into second base, the ball was waiting on him, ending the inning for GHS.

West Vigo added another run in the bottom of the sixth inning to bring the score to its final of 9-2.

Remsburg commented that a lot of teams facing the Vikings walk onto the field cowering and pointed out that his squad didn't do that. The Tiger Cubs had a strong end to their regular season and truly believed that a win was within their grasp.

"Not everyone showed up today, but the majority didn't give up," Remsburg noted. "I feel bad for the seniors. A lot of them believed that, with the way we'd come in that last few weeks, we could beat them and that's hard to do. I've seen kids just... they're over once they see them warm up and they didn't do that tonight and I'm grateful for that. They hung in there and tried. We see what we need to work on."

Looking back over a tumultuous season, Remsburg acknowledged the team began to gel as the season wore on and achieved some of the goals it set out with at the beginning of the season. He also said that the team was up for the game, but West Vigo was just too much for them.

"It could have been a worse season," Remsburg said with a smile. "I'm happy they finished as strong as they did, winning county and they were excited all week at practice and couldn't wait to play and they didn't care who they played. I give West Vigo all the credit; they played ball."

Vermillion led GHS at the plate, going 2-for-3 with two singles, while Trey Ford added a double. Also picking up hit for the Tiger Cubs were Graham Shuee and Bartrum.