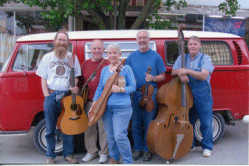 The Greencastle Civic League, along with the Greencastle Parks and Recreation Department, will be celebrating summer for the next nine weeks with the 16th year of Parkfest. Each Tuesday evening from 7 to 8 p.m., a different musical group will be giving a free concert at the bandshell in Robe Ann Park.

Parkfest began in 1994and was the idea of Kathy Jones.

"It started as a way for us to give back to the community for its support throughout the year," said Suzanne Masten, who is coordinating this year's Parkfest.

A number of musicians have been involved with the program since the very beginning, including Mike VanRensselaer and Steve Terry, who perform as the oldtime/folk duo Van-Terry; Tony Harmless who has performed in multiple bands as well as a solo act; and the Brazil Concert Band.

This year kicks off Tuesday with traditional and folk music from the Fret Set Band.

The Fret Set is a group of friends who have been playing together since 1994, with new members added through the years.

Lenora Bowlby is on harmonica and the lap dulcimer, a four-stringed instrument she's been playing since she made one in 1980. Don Bowlby is on mandolin and jaw harp. He says the jaw harp is the only instrument that gets him applause. Lead guitarist Rick Smock has been singing and playing guitar for many years. Jill Dombrowski, a music teacher in Greencastle Schools, plays the hammered dulcimer. Larry "Rooster" Kersey is on bass. He has been playing instruments of one kind or another all his life. Bill Lorton started out on guitar, then mandolin, then took up banjo and then the fiddle.

The songs are traditional and contemporary folk and gospel. The group is involved in community service and performances for schools, churches, lodges, private parties and retirement communities. They also play festivals and at the Pioneer Barn at the Indiana State Fair.

Parkfest will run each Tuesday through July 28. The complete lineup, along with genre, is listed below.

All concerts run from 7 to 8 p.m. at Robe Ann Park unless otherwise noted.