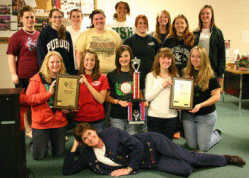 The Cloverdale Women's Ensemble has a lot to sing about.

The group continued its success with Gold Awards from all three judges at the Vocal Jazz Contest in March and again at Organization Contest in April, including a Gold in sightreading.

The result of these accomplishments is that the Women's Ensemble of Cloverdale High School has been awarded an All Music Award Banner from the Indiana State School Music Association for 2008-2009.

As a culmination to its success this year, the group competed in the "Music In The Parks" competition at King's Island on May 16. They earned first place with a superior rating in their division and were rated second place in the overall competition, missing first by a quarter of a point.