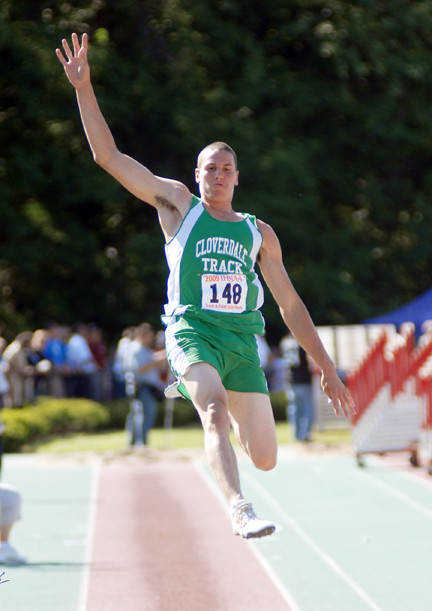 CHS jumper James Hinton glides through the air during the long jump event Friday at Indiana University. Hinton placed fifth in the state with a jump of 22-feet-3-inches.

BLOOMINGTON -- At the beginning of the track season, James Hinton wondered how well he would do in the long jump event.

He got his answer Friday afternoon at the IHSAA track and field state finals at Indiana University, when he jumped 22-feet-3-inches, earning himself a place on the podium and a fifth place medal.

"This feels great," Hinton said. "This is the first time I have ever been at the state meet."

Hinton came into the meet seeded seventh with a jump of 22-feet-3.5-inches and after his flight, he was sitting in fifth with his jump of 21-feet-11.25 inches. And after scratching his first two attempts, Hinton had to make good on his last jump or watch his chance to medal slip away -- and that's what he did.

With a look of determination on his face, Hinton raced down the runaway and launched himself into the air, nailing his last jump and securing his place in school history.

"It truly feels good to be on the podium," Hinton said. "Most people don't even get out of the sectional or regional and I made it to the state meet.

"Its funny, in the beginning of the season I thought that I would be just an average jumper, I guess I was wrong," Hinton added.

Hinton is the first track star at Cloverdale to ever medal in the state event and CHS Coach Kristin Crabtree couldn't have been happier.

"I'm proud of him for getting here in the first place," Crabtree said. "He finished fifth out five flights.

"I knew he could make it down here, I just didn't know he would do this well," Crabtree added. "Everything that everyone told me about him was true -- he really is a great jumper."

Even though he medaled, a feat that most track stars at small schools never do, Hinton is already thinking about next season.

Hinton will return to the Clovers next year as a senior.