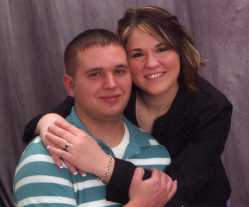 The bride-to-be is the daughter of Donald and Lisa Torrence, Greencastle. She is a 2007 graduate of Greencastle High School and is currently attending Ivy Tech studying Early Childhood Education. She is employed at Round Barn Daycare and teaches two-year olds.

The groom-to-be is the son of Larry D. Marshall (deceased) and Robin and Nolan Hays, Avon. He is a 2003 graduate of Decatur Central and is employed at Hendricks County Sheriffs Department.

The wedding will take place July 11, 200 at 1:30 p.m. in the afternoon at the Greencastle Presbyterian Church with a reception following immediately at Dixie Chopper.

The couple will honeymoon in the southern states and live at Heritage Lake.