Children celebrate birthdays by giving back to community 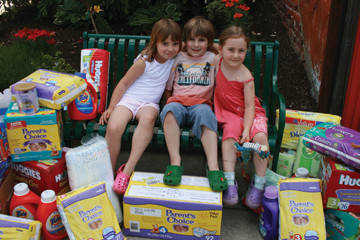 Traditionally, children's birthday parties tend to be all about cake, balloons and presents.

"For selfish reasons, honestly, we thought it would be nice to have a joint party," said Elle's mother Suzanne Masten. "Plus, when kids have birthdays in the summer -- especially around holiday weekends like poor Bijou and Elle -- people are going out of town for the summer and are really busy with their lives, so a lot of them can't make it to parties."

The mothers realized, however, that having one big party for three 5-year-olds could cause a problem.

"We thought it would be an awful lot for people to bring gifts for all three kids," Suzanne said.

To that end, Suzanne, Bijou's mother Heather Sloan and Kai's mother Donna Anderson decided they would ask party guests, in lieu of gifts, to bring a bag of diapers, bottle of laundry detergent or another needed item to donate to Putnam County Family Support Services Inc.

Family Support Services is an agency that provides programming and support for families throughout Putnam and Owen counties.

"Basically, it came down to all our children were fortunate enough to have all their needs met plus have ample amounts of toys already," Heather said.

The mothers sent out party invitations that included a list of items Family Support Services was in need of. Most of the dozen or so guests at the party brought items to donate or brought cash contributions.

Some even sent along donations even though they couldn't attend the party.

The mothers also wanted to set a good example.

"We just figured we would make this the time to teach the children that parties are about being with friends and celebrating, not about presents," Suzanne said. "I think we all feel we're pretty fortunate and that our kids don't want for a lot."

"The kids have so much already," she said. "I think we all know that when we throw parties for our kids, they get a lot of things they don't need and that they never use."

Kai, Bijou and Elle still had gifts to open at their party -- each guest of honor brought a gift for the other two.

And that was enough for them.

Splitting the cost of the party also allowed the children's families to spend a little more money on entertainment for the event, ensuring the children didn't miss having scads of gifts to open.

"We were able to get a big bounce and have hayrides," Suzanne said. "The kids didn't even talk about gifts, and I think it was awesome for them not to expect them."

A nice surprise for the children was that many of the guests made them homemade birthday cards.

"That was really special," Suzanne said.

A couple of days after the party, Kai, Bijou and Elle helped their mothers deliver the donated items to Family Support Services. They smiled and skipped down the sidewalk, hauling boxes of diapers and bottles of detergent.

"Just look how happy they are," Donna said with a smile. "They don't care that they didn't get a bunch of presents. They're happy because they know they're helping other people."

Heather felt the children actually taking the donations in was an important part of the experience.

"They saw where things were going and we got a chance to actually talk about it," she said.

Heather said she doesn't think she and her friends are "special parents" for asking for donations instead of birthday gifts for their children.

"I believe there are a lot of people who feel this way," she said. "We want our children to grow up with the idea that they're responsible to their community."