'Spirit of Philanthropy' alive in county 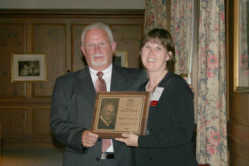 Ken Eitel was the recipient of the Spirit of Philanthropy Award presented by Putnam County Community Foundation President Denise Sigworth. Eitel was honored Wednesday evening during the foundation's annual meeting.

Ken Eitel received the Spirit of Philanthropy Award at the 24th annual meeting and dinner of the Putnam County Community Foundation Wednesday evening.

The award is the highest honor bestowed by board members of the community foundation and recognizes outstanding philanthropic achievement within the Putnam County community.

"Ken Eitel and his family recently established the Eitel Family Scholarship for Ivy Tech, but this is only the tip of the iceberg," said Denise Sigworth, president of the community foundation.

"Over the years, Ken has used his talents to guide organizations such as Main Street Greencastle, various Greencastle planning groups and the Historic Preservation Society of Putnam County. Ken loves Greencastle and Putnam County and feels compelled to give what he can back to the community that has given so much to him," she continued.

Dinner attendees were given the opportunity to purchase a box of homemade chocolates donated by Treasurers on the Square, which gave them a one in 150 chances to win a diamond necklace donated by Mason Jewelers, a Blu-ray disc player from Shuee and Sons and a Wal-mart gift card.

A very excited Vickie Parker won the diamond necklace. Pattie Harmless won the gift card and Therese Cunningham was the highest bidder on the blu-ray disc player. Garry Wolfe auctioned the player, after the wife of Bill Shuee initially won it.

"We are grateful to our partners in philanthropy who helped make the evening unique," said Sigworth. 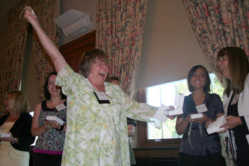 Vickie Parker was the winner of a diamond necklace donated Steve Mason owner of Mason Jewelers in Greencastle.

For a gallery of pictures from the dinner, click here.