TERRE HAUTE -- He might have missed half of the 2008 season, but Jerrett Ban never lost a step.

"It was nice to see Jerrett to get back in the game and do some nice things after missing half the season this year," NP Coach Gregg Barrett said. "I think Jerrett got faster since the fall." 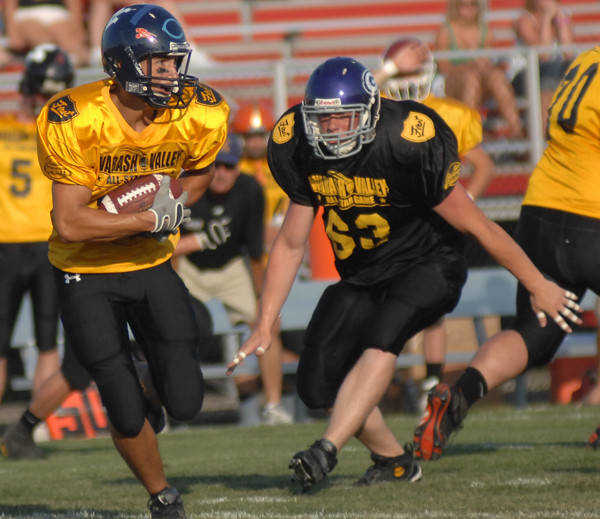 Ironically, three of the five touchdowns that the North All-Stars scored came from North Putnam players.

The first one came courtesy of Seth Vondersaar when he broke through South's offensive line and recovered Kyle Nobles' botched punt attempt in the end zone for the touchdown with 11 seconds to go in the first quarter.

"I was playing defensive end and went in and he fumbled the ball, I hit him and jumped on top of it," Vondersaar said. "The funny thing about that is that me and my friends were joking about me getting a touchdown early today."

Vondersaar was also the leading tackler for the North team. He totaled 11 total tackles with five of those being solo tackles and another being a QB sack for a 14-yard loss.

Alongside Vondersaar, Josh Keyt made his defensive effort known, sacking the South offense twice for a loss of six yards while Corey Crowder from Northview completed four tackles and blocked one PAT. Jordan Keller and Troy Fabbri, also of Northview, had one tackle each.

"This is a great feeling and a great way to end a high school career," Ban said.

Ban did more than score points Saturday night, he scored some cash for school as he was awarded the Pete Varda/WVFCA Hall of Fame Scholarship for the amount of $1,500. The neat thing about the scholarship is that the coaches don't pick the recipients -- the players do.

North Putnam wasn't the only county school that had kids making noise in the game. Buzz Deer from Greencastle nailed a 35-yard field goal as the clock expired in the fourth quarter.

"North had a much better football team than us," GHS Coach Mike Meyer said. "We just couldn't get anything going on offense and defensively we just couldn't stop them."

Even though his team lost, Meyer was happy for the kids.

"This is a good game for these kids and for some of them it's there last one so I'm happy for them," Meyer's said. "I enjoyed this game. You get took work with other coaches you don't know and just sit back and talk about football and that's what I'm all about."

Ban wasn't the only player from Putnam County to get a scholarship. Jacob Wright from Greencastle and Conor Frame from South Putnam were also awarded scholarships. Wright was awarded the Sir Thomas automotive "Coaches Pick" scholarship while Frame was awarded the Bret Eitel Memorial Academic Scholarship.

Several other players from Putnam County also participated in this game. Representing the Tiger Cubs in the game along with Deer and Nobles were Kyle Buchanan, and Ashton Marshall. Representing Cloverdale were Nick Keefer, Sam Spinks and Alex Swenson, while Hank Goldman, Colby Judy, Trent Knight and Derek Tomaw along side Frame represented South Putnam. The Cougars were also reprented by several players. Alongside Vondersaar, Keyt and Ban were Kyle Everts, Griffen Dahlstrom, Scott Hunt and Brent McGaughey.