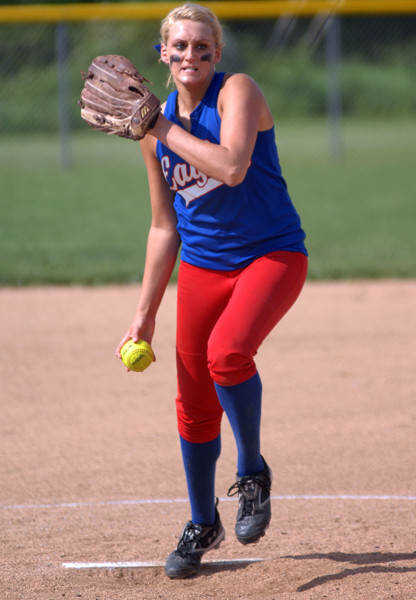 Brooke Boetjer led South Putnam to its first ever perfect regular season this past spring.She allowed only five earned runs in 2009 for a 0.39 ERA.

The 2009 softball season was punctuated by significant moments. A perfect regular season, dominating pitching performances and a freshman class that made an indelible mark in '09.

In a year with many memorable performances, one player was able to put together a season that has earned her the 2009 Banner Graphic Player of the Year.

South Putnam freshman Brooke Boetjer has earned the distinction after going 12-1 on the season and helping lead the Eagles to their first ever perfect regular season. In 89 innings pitched, she allowed 38 hits and allowed only five earned runs. Boetjer led the county with an ERA of .39. On the offensive side of things, Boetjer batted .417 with 25 hits, five doubles, four home runs, scored 14 runs and collected 25 RBIs

Dabkowski, a freshman, collected 23 hits, 20 runs, two doubles and nine RBIs on the season. She was third on the team with a batting average of .377.

North Putnam and Cloverdale placed three players each on this year's team.

Sophomore Taylor Judy put up some incredible numbers this season. She easily led the county and was ranked fourth in the state in strikeouts with 231. In 141 innings pitched, she recorded an ERA of .64, with 85 hits and 31 earned runs. At the plate, she batted .302, including 16 hits, five doubles, four home runs, one triple and 12 RBIs.

Freshman pitcher Paige Gutierrez helped lead Cloverdale to a season to remember. The Clovers recorded a mark of 13-12, but were able to capture their first softball sectional in school history.

Sophomore Martika Byrd averaged .329 at the plate and collected 28 hits, including four doubles and 13 RBIs. Freshman Kara Knapp was a big producer at the plate for CHS, averaging .313, with 26 hits, five doubles and 17 RBIs.

Pruitt had arguably the most productive offensive year this season. She led the county in batting average with an amazing .457 and in hits with 34. She recorded six double and scored 17 runs for the Tiger Cubs. Miller was second on the team with a .333 batting average, with 24 hits, five doubles and 13 runs scored. She was also the Tiger Cubs major pitching force, collecting 100 strikeouts in 121 innings pitched. She led the team with a 5.32 ERA.