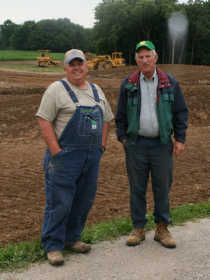 Board members Keith and Gordon Hutcheson stand in front of the new expansion area at Boone Hutcheson Cemetery in southwestern Putnam County. This addition will include 3,000 new plots in one of the oldest cemeteries in the state.

The Boone Hutcheson Cemetery has gravesites that go back as far as 1812, more than a decade before the formation of Putnam County. Many pioneers who helped create and grow the county are buried in this quiet island of solitude resting on top of a hill in southwestern Putnam County.

Among them are members of the Daniel Boone family, possibly including his sister and sister-in-law. Numerous other Boone descendants are buried in the cemetery.

Three of Squire Boone's (Daniel's brother) children are buried here. Not everyone agrees that Phoebe Rissler Boone (Squire's wife) is buried here, although there is a monument to her.

Three of her children, Matilda, Irv and Melmoth are all buried in Boone Hutcheson. Some records show the stone with Phoebe's name was erected by her family when she and Squire left Putnam County in 1852 for Iowa.

Besides the Boones, Hutchesons and Risslers, some of the older names in the Boone Hutcheson cemetery include Halls, McIntoshes, Smiths, Chadwicks, Chews, Lewis, Olivers, Roberts, Rogers, Strobes, Sutherlins and many others.

"Two Boone boys were here just last week from Indianapolis. They are direct descendants of Daniel. They were making arrangements to be buried in the Boone section in the front of the cemetery," explained board member Keith Hutcheson, who has five generations of family buried at the cemetery.

The cemetery is open to anyone wishing to purchase a plot and soon there will be 3,000 more gravesites available. The cemetery's board of directors recently voted to spend $35,000 on the purchase of land and development of more sites directly north of the original cemetery.

"We think this addition will take the cemetery far into the future and provide plenty of space for future generations," said Gordon Hutcheson, another multi-generational descendent of early Putnam County pioneers.

The board members also hope the addition will bring in needed donations to keep the cemetery in good shape. They have been considering the expansion for over ten years.

"The board noted how the gravesites were diminishing and feels it is important for those of generations to come to have burial options at Boone Hutcheson. This is a way to keep it open and have sites available for years to come," said Gordon Hutcheson.

Annual maintenance and the cost of insurance per year is approximately $7,000. The addition will add to that cost. Because of this the cemetery board is asking for one-time donation pledges to help replenish the cemetery funds.

"Any amount is appreciated. We are offering the opportunity for a gold pledge for $1,000 or more (installment payments may be made); a silver pledge of $500 or more and a bronze pledge of $100 or more," said Gordon Hutcheson.

Most of the work done in the cemetery is done by the board members including mowing and other maintenance. They will also do most of the construction of the new area. They have cleared the land and now will begin hand-measuring the four by ten foot sites.

"It will take at least 2,600 bricks. These all have to be laid on the corners of each site. We have to hand dig every hole for the bricks. It's hard work but saves us a lot of money," explained Keith Hutcheson.

He added that board members and family members have been doing the maintenance at Boone Hutcheson for a long time.

"At one point this place was overrun with blackberry vines. They were so thick the horses they were using to pull the mowing machines didn't want to walk in where the bushes were," said Keith Hutcheson.

When asked how the site for the cemetery was chosen. The two Hutchesons supposed that first early settler buried in 1812 was laid to rest by fellow pioneers who ventured into the yet unformed Putnam County.

One of the earliest known settlers in Putnam County was Dr. Walter Hutcheson who arrived in 1827, nine years after the first recorded settlers James Athey and John Colman submitted land deeds in 1818. Putnam County was not founded until 1821; a year after Daniel Boone died at the age of 80.

At that time Indiana was a primeval forest covering an unbroken wilderness from the Ohio River to the northern part of the county. The pioneers buried in Boone Hutcheson embodied the cherished American characteristics of rugged individualism, strength and bravery.

As more families followed these early settlers to Putnam County they built lives. They married, had children and buried their loves ones. Many are in the beautiful, historic cemetery sitting on a tall hill overlooking Walnut Creek and the picturesque Houck Covered Bridge.

"We have all kinds of visitors up here," said Gordon Hutcheson. "We have DePauw students, people from out of the county and neighbors who all come up here. Some of them hunt through the gravestones. Some of them just sit and look out over the view. It's a beautiful place."

"We want it to last long into future generations, open to anyone who wants to be here," said Keith Hutcheson.