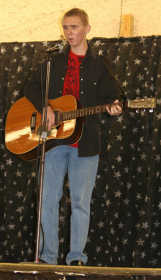 Tony Patrick performs David Archuletta's "A Little Too Not Over You" at Sunday's talent contest. Patrick's performance was impressive enough to win the overall senior title.

With a theme of "So You Think You Got Talent," 16 local youths, some as individuals and some as groups, proved they indeed have talent.

In the senior competition, Tony Patrick was a double threat. He bested the other competitors by playing guitar and singing on David Archuletta's "A Little Too Not Over You." Reserve champion in the seniors was Krista Gordon, who sang Taylor Swift's "White Horse."

The overall champions and reserve champions earned a spot in the Indiana State Fair Talent Contest next month. They will also be joined by three other acts who won their individual divisions Sunday evening.

The senior dance group of Ariel Higgins and Madi Egold won their division with a routine they choreographed with the help of their older sisters.