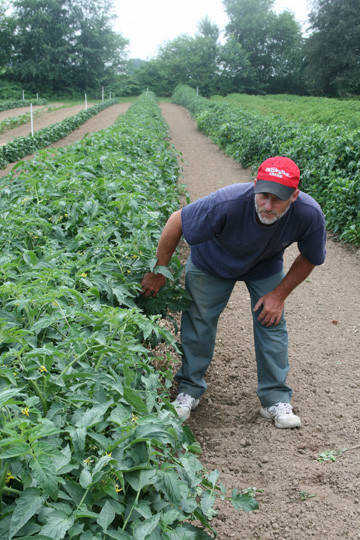 Bob Zaring looks over some of his many tomato plants Friday afternoon. He is a regular vendor at the Putnam County Farmers Market held on Saturday mornings.

Putnam County resident Bob Zaring has a very green thumb. This is evident every Saturday at the Putnam County Farmers Market where he displays his gorgeous vegetables.

You can find him on the northwest corner of Franklin Street every Saturday, rain or shine.

"He not only has the largest selection, but also the best display," claims Maxine Williams.

Zaring grew up in Putnam County and is South Putnam graduate. He and his wife Tina moved to their farm shortly after graduation. For 28 years he worked at the stockyard in Greencastle. When it closed down three years ago, he expanded his garden and began selling his produce.

Several local restaurants and area businesses buy from him regularly. His sweet corn and green beans are in constant demand.

Amazingly, Zaring does about 90 percent of the work required to grow as much produce as he produces. His wife Tina and son Taylor help when they can.

"I spend a lot of time weeding. I see people who have these little garden plots and never weed them. There's no point in having a garden if you don't weed it," he said.

His produce is a regular winner not only at the Putnam County Fair, but also at the Indiana State Fair.

He has been experimenting with growing some giant pumpkins. His largest one has been just less than 300 pounds.

"Some of these grow to 750 or 1,000 pounds. But people have to baby them to that. I just don't have enough time to baby them. My secret is to cut the roots that grow by the vine and put Styrofoam under it and keep it off the ground," revealed Zaring.

Last year, fair officials asked him to bring one of the giant pumpkins to the fair. Afterwards, his wife told him not to bring it back home.

"It was one I had from the year before and put in my basement. It was still fine and I took it to the fair. Afterward, we took it over to the truck pull and gave it away to a little boy," he recalled with a slow smile.

Every year, Zaring experiments with something new. This year he is trying to grow peanuts.

"My brother had some friends down in Georgia and that sent me some seeds so I planted them. I don't know how they are going to do. They sent me enough seeds to plant a lot more, I just didn't have the space," he added.

Zaring has a lot of regular customers who stop by his home and find him working in one of the many gardens. His plants grow in plots on his farm and on his parents.

"I don't ever mind if people are driving by and want to stop and buy something. A lot of times they tell me they see me in one of the gardens and don't want to bother me. It gives me a break so I don't mind," he said.

One of his regulars is a local woman who makes award winning dill pickles every year using his cucumbers.

"She stopped by for some cucumbers earlier today. I asked her why she never brings me any pickles. She brought me some back. They are mighty good, but she wouldn't share her recipe with me," he added.