Gilbert siblings have brush with Hollywood 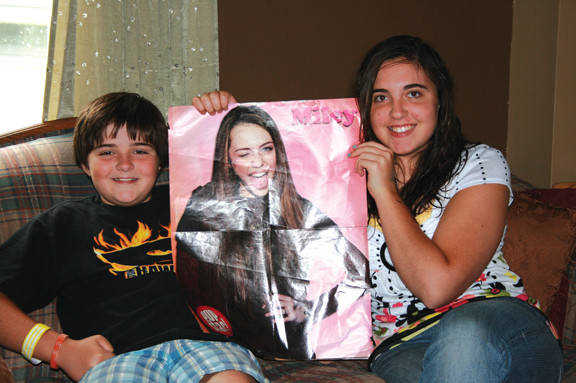 GREENCASTLE -- A summer vacation with their grandmother turned into the opportunity of a lifetime for Shelby and Christopher Gilbert of Greencastle.

The siblings were visiting their grandmother, Ginny Callahan, also of Greencastle, at Ginny's vacation home on Tybee Island, just south of Savannah, Ga., in June. During their stay in Georgia, all three were tapped as extras for the upcoming Miley Cyrus film "The Last Song," set to debut in theaters in January.

Christopher, 10, is a student at Tzouanakis Intermediate School. Shelby, 16, is a junior at Greencastle High School. They knew the movie was filming in Tybee Island, but had no idea when they went on vacation that they would end up appearing in it.

"It had been in the papers that they'd be shooting the movie there," said Shelby and Christopher's father Chris. "They built a whole carnival there just to use as a set for the movie."

The curious Gilberts and their grandmother decided to check things out.

"We just went down to the beach to look at the set," Shelby said. "We put our names in (to be used as extras), and they called us the next day."

The Internet Movie Database Web site lists "The Last Song's" tagline as "Do you ever really forget your first heartbreak?" The site describes the movie as "A drama centered on a rebellious girl who is sent to a southern beach town for the summer to stay with her father. Through their mutual love of music, the estranged duo learn to reconnect."

The site lists Offspring Entertainment as the company distributing the film.

Chris and Shelby had their hair and makeup done at a local YMCA, and then were taken to the set for their day of filming. They worked from 5 p.m. until 3:30 the next morning.

"The first scene I worked on was on the pier," Shelby said. "I was just supposed to be pointing out random ships. It was very repetitive ... I had to do the same thing over and over until they got the shot they wanted."

Christopher, Shelby and their grandmother all rode a Tilt-A-Whirl carnival ride for an hour and 48 minutes while the crew shot footage.

"They also did a lot of shots of us walking in and out of the carnival," Shelby said. "There was another shot of just Christopher running down the beach."

A difficult scene for Chris was one where he had to sit at a table with a group of adults.

"I couldn't make any noise," he said. "The speakers pick up everything."

Christopher and Shelby both got very close to Miley Cyrus, but neither of them actually spoke to her.

"They had rules," Shelby said. "You couldn't start a conversation with her, but if she asked you a question you could talk back to her. I did one scene where I was right beside her, but I didn't really talk to her. She seemed nice, though."

Ginny wasn't as thrilled to be used in the film as her grandkids were.

"They made her walk around with a man who wasn't her husband, and he had to put his arm around her," Christopher said with a giggle. "I don't think she really wanted to be in it."

Hundreds of extras were used in the movie.

Chris and Shelby aren't sure if their names will appear in the movie's credits.

"They paid us, so I'm pretty sure we'll be listed," Shelby said.

The movie will debut in Tybee Island in January.

"I'm hoping our parents will let us go, but I don't think they'll let us miss school for it," Shelby said.

Christopher admitted that he is a bigger Miley Cyrus fan than his sister.

"He was just in awe," Chris said. "He thinks the sun rises and sets on Miley Cyrus."

Even though the conditions weren't the best the entire time, Shelby and Christopher are both glad they got to experience life on a movie set.

"It was 110 degrees and the beach was flooded," Shelby said. "It was hectic and crazy, but it was so worth it."