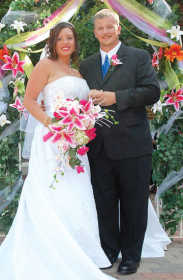 Samantha will graduate from Ivy Tech Community College, where she is pursuing a degree in medical assisting, next spring. She has been employed for five years as a nurse's assistant at Putnam County Hospital.

The groom is the son of Brian and Debra Monnett of Greencastle. He is employed by Auto Zone. His grandparents are Danny and Wanda Gidcumb of Reelsville, Marge Miller of Cloverdale and the late Eugene Monnett.

The double-ring ceremony, which was held outside, was officiated by the Rev. John Lilly. A reception followed at Walden Inn.