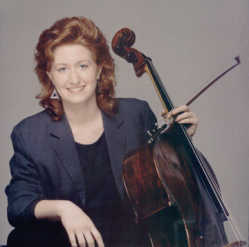 GREENCASTLE -- Classical musicians from the Lafayette area "invade" Greencastle tonight, as cellist Margot Marlatt and pianist Shellie Johnson perform a program of Bach, Brahms and Schumann in the eleventh concert in the 2009 Greencastle Summer Classical Music Festival. The Festival presents free events at 7:30 p.m. every Wednesday night through Aug. 19, with funding coming from donations. Chief's Restaurant of Greencastle is sponsoring Marlatt's performance.

Festival Artistic Director Eric Edberg said he is excited about welcoming Chief's as a business sponsor of the series. "We have great financial support from individuals in the community, but it's been a while since a local business has donated money to fund the appearance of one of our artists. One reason is that I haven't had time to ask them! So we're putting together a fund-raising committee to work on this for next summer. Meanwhile, we really appreciate Chief's--which does a lot to make Greencastle a better place--supporting the series, and I hope everyone who values the series will be sure to thank Steve the next time they eat at Chief's."

Marlatt has been playing the cello since the age of seven. A graduate of the Interlochen Arts Academy, she went on to earn her Bachelor's Degree in Cello Performance from the University of Toronto under the guidance of Denis Brott and received her Master's Degree in Cello Performance from Butler University where she studied with Dr. William Grubb. During her studies Marlatt participated in master classes with Janos Starker, Lorne Munroe, Gyorgy Sebok, the Cleveland Quartet and the Orford Quartet.

In her professional career, Marlatt has performed as soloist, chamber musician and orchestral player. As soloist she has appeared with the Indianapolis Chamber Orchestra, the Lafayette Symphony Orchestra, Purdue University Symphony and the Bronx Symphony Orchestra in New York City. In 1992 Marlatt joined violinist Alfred Abel and violist Colette Abel to form Trio Amabile. Together they have performed concerts on the Taft Museum(Cincinnati) Chamber Music series, Wabash College Visiting Artist's series and the Tippecanoe Chamber Music Society series. As an orchestral player Marlatt held the position of principal cellist with the Lafayette Symphony Orchestra for 12 years. She continues to freelance in the Indianapolis Symphony and the Northwest Indiana Symphony. Marlatt has served as cello instructor at Wabash College and Purdue University along with teaching in her home studio.

In addition to performing, Marlatt is the Executive Director of the Tippecanoe Chamber Music Society and the owner of Classical Music Agency (www.hireclassicalmusic.com), a musical resource for weddings, events & parties.

Johnson has held accompanist positions at Eastern Kentucky University, University of Richmond, Virginia Commonwealth University. She has collaborated with a number of arts organizations and artists such as Actors Guild of Lexington in Kentucky; Theatre IV, Barksdale Theatre, Theatre Virginia and Richmond Ballet in Virginia; Música de Cámara, Inc., Spanish Repertory Theatre and Thalia Spanish Theatre in New York City; and The Institute of Culture of Puerto Rico, Ballets de San Juan, the Interamerican Festival of the Arts and Opera de Cámara in Puerto Rico. As a rehearsal accompanist, she has worked under the batons of Joel Sachs and Gunther Schuller, in the preparation for the premieres of new works by Roberto Sierra and Alfonso Aponte Ledée, respectively. Collaborative recitals include vocal and instrumental recitals at Weill Recital Hall at Carnegie Hall, Manhattan School of Music and Spanish Institute in New York. Johnson has also given solo recitals at the Ponce Art Museum (Puerto Rico), the Virginia Museum of Fine Arts, the Martin Luther King, Jr. Memorial Library (Washington, D.C.), Los Andes Auditorium (Mendoza, Argentina) and others.

Currently an accompanist for the Bach Chorale Singers and the Lafayette School Corporation, she also serves as pianist at the Lafayette Unitarian Universalist Church, occasionally musical directs Lafayette Civic Youth Theatre shows, and accompanies many local college and high school students in competitions and recitals. She will join the adjunct faculty of St. Joseph's College Music Department in the Fall of 2009.

Also a singer, Johnson is a current member of the Lafayette Chamber Singers and a former member of the Bach Chorale Singers, James River Singers and St. Cecilia Choral Society. She was soprano soloist in Handel's Messiah performed with Boricua College Chorus and the Bronx Arts Ensemble in New York City. She recently performed the role of Lady Thiang in Civic Under the Stars' production of "The King and I."