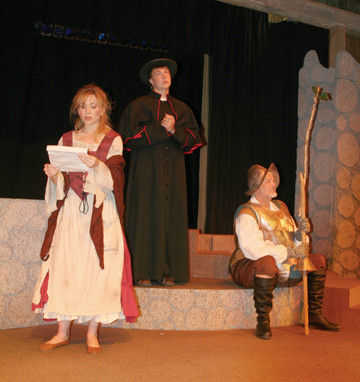 Caroline Good, left, portrays Aldonza in Man of La Mancha at the Putnam County Playhouse. She is accompanied on stage by Kenny Buchanan as Padre and Ric McFadden as Don Quixote. Man of La Mancha opens at 8 p.m. Aug. 6 at the playhouse. There will be a matinee at 3 p.m. Sunday. Tickets are $9.

GREENCASTLE -- The 2009 season of Putnam County Playhouse continues in August with a production of the musical Man of La Mancha. It will be onstage Aug. 6-9 and 12-15. Sunday, Aug. 9, is a 3 p.m. matinee. All other performances are at 8 p.m.

All tickets are $9. They can be reserved by calling the box office after 5 p.m. The box office is open Monday through Saturday from 5 p.m. to 7 p.m. and can be reached by calling 765-653-5880. Seats are available for all performances, but reservations are recommended. The Sunday afternoon performance has the most availability.

The production is sponsored by Duke Energy Foundation.

Man of La Mancha is a Tony Award winning musical written by Dale Wasserman. The lyrics are by Joe Darion and the music by Mitch Leigh. When poet Miguel de Cervantes and his friend Sancho Panza are jailed in 16th century Spain, he tells the story of his character Don Quixote to escape punishment. Songs from the score include "The Impossible Dream", "Dulcinea", and "I, Don Quixote."

Ric McFadden is in the leading role of Cervantes who also takes in the guise of Don Quixote. Jim Poor returns to the PCPH stage as his squire, Sancho. Their fellow prisoners join in the charade, taking parts in Quixote's play as he presents his defense. Included are Caroline Good as Aldonza, the kitchen maid; Chris Wurster as Dr. Carrasco; and Kenny Buchanan as the Padre. Featured roles will be played by Jim Rambo, Sandi Rossok, Katie Clark, Kyla Scheuermann, and Shelly McFadden.

Set and lighting design is by Poor and Earles, with additional painting and design by Linda Gjesvold. Technical direction is by Bryan Schroeder. He is assisted by Kristen Burger. Lightboard operator is Tiarra Phillips, and the spotlight operator is Tony Canady. Assisting Myrick backstage is Roxanne Wheeler.

Persons attending the show will also be among the first to hear the announcement of the shows chosen for the 2010 season.