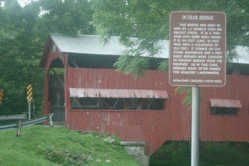 The historic Dunbar Covered Bridge will be bypassed, and a new bridge erected once County Commissioners find a way to move a stretch of Dunbar Road out of the flood plain.

GREENCASTLE -- Putnam County Commissioners Gene Beck and Jim Baird were looking for a more effective solution to building a bridge and road that won't flood on Dunbar Road at their Monday morning meeting.

The project will realign 2,000 feet of the road west of SR 231 and includes bridges 104 and 105. The area lies in a flood plain from Big Walnut Creek.

INDOT approved spending $1.1 million on the original plan to bypass the Dunbar Covered Bridge, build a new span across the creek and move the roadway into a nearby field to avoid the flood area.

After having hydraulic studies performed in 2006, it was discovered an additional small bridge and overflow area would be required in the field, increasing the cost of the project.

The project was put on hold while officials searched for another way to move the road without increasing costs.

One possibility is to go north with the road.

"We can't change the waterway of the area where the historic Covered Bridge sits," said Mike McCool of BLN, the company hired to do the hydraulic study.

"We could go straight across at the curve and build a span with a single structure," said McCool. "There has been a problem with erosion at that spot, so we need to look at it."

Commissioners agreed to have BLN look at two new alignments and extensions for the project.

Jim Smith with the County Highway Department asked commissioners to approve hiring a company from Brownsburg with special equipment to determine the depth and location of problem sewer lines in the Edgelea housing development.

Commissioners approved spending up to $2,000 for the project. The money will come from Lilly Endowment monies.

Smith also reported the West Walnut Street project is a go as far as he knows.

"The State took bids last week and should assign it sometime this week," he explained.

Cost for the project comes from state and federal stimulus monies.

Sheriff Steve Fenwick appeared before the board and asked for permission to hire a Lieberman Technologies to take over sheriff sales in the county.

Lieberman currently works with 42 counties in Indiana providing services that range from handling all details of sheriff sales to providing partial services.

"Using our services can relieve the sheriff department of all responsibilities except for notices for the sales," said Phil Lieberman.

The company works with all county officials as well as the sheriff department and uses an automated process for the monthly sale. They receive $92 per sale.

The county averages about 30 sales a month.

Commissioners had some concern with accounting issues, including who writes the checks to all the parties in the sale. They turned the contract over to county attorney Scott Hoff to review and tabled making a decision until the Aug. 17 meeting.

Using direct deposit can save both time and money for county officials and funds are 100-percent insured as long as the bank where the deposit is going has a state charter.

Hoff had some issues with the contract presented by ONB that representatives say is a standard contract.

"The problem," said Hoff, "is that it is geared toward companies, not public entities. I expect to give you a negative answer on the contract."

Hoff asked ONB to change some of the wording, but they refused. The issue was tabled.

Commissioners opened bids for the new phone system at the courthouse and took them under advisement. Bids were presented from Gibson in Terre Haute for $79,525.53 and from H.O.P. in Greencastle for $71,451.12, plus an additional $5,000 to Cinergy Metronet for fiber optics.

A discussion of what to do with the Putnam County Home took place with a general consensus that a public auction will be the most likely action.

County Commissioner Gene Beck remarked that they have asked the Putnam County Board of Realtors for some ideas on how to parcel the land, but have had no response from them.

They are also trying to determine how much land to leave with the house.

Commissioners plan a final inspection of the home at 3 p.m. on Aug. 17. Their regularly monthly meeting will be that evening at 6 p.m.