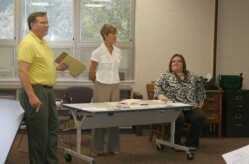 This was the second such meeting in the city, following a First Ward meeting earlier this year. Hammer, along with Mayor Sue Murray and City Planner Shannon Norman, fielded questions and concerns from second ward citizens about infrastructure, safety and neighborhood involvement around the ward and the city at large.

"What we need to do is hear from you on what the issues are in your neighborhood," said Murray. "This is the beginning of a dialogue that's hopefully going to continue."

Hammer assured the crowd, though, that one tiresome issue would not be on the agenda.

"There's not going to be any mention of health care tonight," Hammer said to a round of laughter.

Leading up to the meeting, Hammer had gone door-to-door in the ward distributing surveys to citizens about their thoughts on the state of their neighborhood. A number of these had already been returned to city hall, but Thursday's meeting was another chance for the citizens' voices to be heard.

Residents in the Ridge Ave. area expressed concern over a neighbor's wood burning stove, which could be causing health problems for some in the neighborhood and makes it difficult or impossible to have windows open when burning is taking place.

With several citizens voicing their concerns about the air quality, the officials present said they would see what avenues could be pursued both locally and at the state level with the Indiana Department of Environmental Management.

More meetings of this nature should follow later in the year, hosted by councilors Jinsie Bingham in the Third Ward and T.J. Smith in the Fourth Ward.