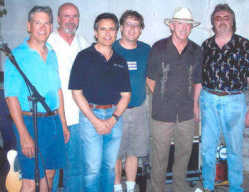 GREENCASTLE -- Depending on who you ask, rock and roll was invented in the 1930s, 40s or 50s. Be that as it may, more than 250 years of rock experience will be taking the stage at the Walden Inn tonight and tomorrow.

The Average House Band will once again be reuniting this weekend for a pair of shows.

Guitarist and vocalist Steve Michael said the vets of the Putnam County music scene bring some major music experience with them.

"This is my 45th year of playing rock and roll," Michael said. "Between all six of us, we have over 250 years of combined rock and roll experience that will prevail over the weekend."

Although the six band members who will be back together are spread throughout the country, they are ready to put on a show for their Greencastle fans.

"The same guys are back," Michael said. "Bill Hamm and I still live in Greencastle. Sandy Williams lives in Indianapolis. He plays guitar. He is a first call session player, and he is strictly a professional musician. He is one of the best guitar players you will ever see.

"Rod Kersey still lives here in town and is one of two drummers for the event. The house band actually had three drummers. Fred Badalli comes back from Florida every year for this and plays a set on the drums and then Rod plays a set. We switch drummers halfway through the show. Danny Martin is guitar player and lead vocals and he just flew in from California," he added.

The third year of the reunion, this show has been highly anticipated by nostalgic fans. Reserved tables are sold out for Saturday, but general admission is still available. Tonight's show will be entirely general admission.

"It should be fun. On Saturday, all the tables are sold out, but that shouldn't deter people who want to come because there's plenty of extra seating around. Last year, people were moving from table to table and talking and getting reacquainted with each other," Michael said.

Both shows are $5 per person, with a portion of the proceeds going to the Putnam County Humane Society. Humane society members will also work the doors both nights as well as conducting a 50/50 drawing benefiting their organization.

Michael thanked the Walden Inn for the venue as well as Chief's South By Southwest for underwriting some of the production expenses.

The Walden has also reserved a block of rooms for the event. Anyone requesting a room will get a discounted rate, which includes breakfast.

There could also be some special treatment at the show itself.

"The VIP package is called the 'Touch of Mink VIP Package.' Everybody who buys a ticket is entered in a drawing," Michael said. "We gave away a very horrible, old fake mink coat last year as the VIP package. This year, we actually have a much nicer fake mink coat. We'll have some fun with that."

And fun is what it's all about. With everyone reassembled, the group is ready to go.

"We have rehearsal Thursday and then we hit the ground running Friday," Michael said. "Last year, it was a lot of fun because we had a lot of people who had been married for 25 or more years who started dating and coming out and seeing our band back in the 70s. There were a lot of familiar faces, and it's got a real nice homecoming feel to it. They're bringing their kids now to see us, and fortunately they seem to like us too."

Doors open at 8 p.m. with music beginning at 9 p.m. There will also be a cash bar available.