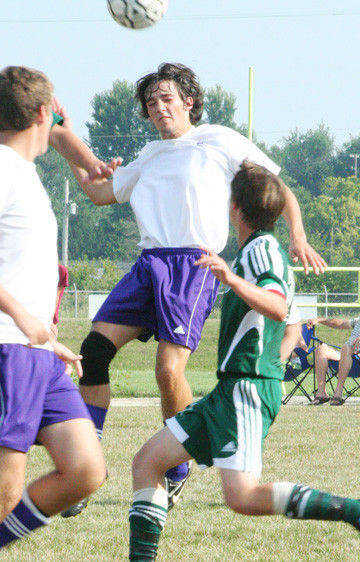 Greencastle senior David Cath rises above the rest to complete a header during Tuesday's contest.

GREENCASTLE -- In their first outing on the pitch in 2009, the Greencastle boys' squad had to use all 80 minutes and then some to defeat Monrovia 2-0 Tuesday.

Greencastle's lack of scoring wasn't for lack of effort. The Tiger Cubs fired 27 shots in the contest, but head coach Dave Lilly wasn't too thrilled with shot selection following the game.

"I think we had close to 30 shots and, like I said at the beginning of the season, we lost a lot of offensive scoring with the three seniors that we graduated," Lilly said.

"Our shots were not good. Ninety percent of them were soft and high and weren't even on goal. We definitely have to work on that," he added.

After regulation ended with both team posting zeros on the scoreboard, it didn't take GHS long to change that.

In the first seven-minute overtime half, junior Josh Bonebrake found his way into the middle, worked the ball across his body and fired a shot that zipped past Monrovia's goalie Bryce Wicks at the 1:44 mark.

Teammate Mitchell Ball joined in on the scoring in the second overtime half, after blasting one into the net with 4:22 remaining.

Lilly voiced his confidence in his keeper Kyle Parker after the junior stopped multiple shots on the night, including one at the end of regulation.

"Parker made a nice save to keep us in it at the end of regulation. I'm comfortable with him in there and if it came down to it, I think we could have won it with penalty kicks. I'm glad to see it come about the way it did," Lilly said.

Spacing seemed to be an issue for GHS Tuesday. Lilly acknowledged they struggled with it, but fully expects his team to be able to correct it as the season wears on.

"It seemed like it was our first game," he said with a smile. "We tended to run to the same spot and just stand and we know better, but I know the guys will improve as the season goes on. This is by far our best with the guys we have. I'd like to see us work on finishing a lot more than what we have. Hopefully that will help our offense."

On the defensive end, Lilly was pleased with what he saw against the Bulldogs. GHS was able to limit them to under 10 shots for the night and beat their players to spots throughout the contest.

"Defensively, I feel really good. I think it's going to be hard for teams to score on us. They didn't have a lot of chances tonight. As I've said, you can outshoot people all day long, but you have to put it in the goal to win," Lilly said.

Next game -- Greencastle will host Lebanon Thursday at 7 p.m.