Ziegelman honored by Masons for 50 years of service 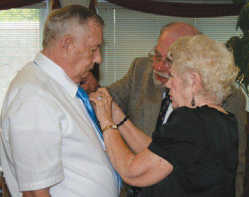 Elly Ziegelman helps Cloverdale Lodge of the Free and Accepted Masons Master David Nolton, center, attach a Grand Lodge Award of Gold pin on Ziegelman's husband Robert, who has been a member of the Cloverdale lodge for nearly 52 years.

GREENCASTLE -- Being a Mason is something of a family tradition for Robert Ziegelman of Greencastle.

The 77-year-old's father was a longtime member of Cloverdale Lodge No. 132 of the Free and Accepted Masons, where Ziegelman was recently honored for more than 50 years of service.

Cloverdale Lodge Master David Nolton presented Ziegelman, who has been a member of the lodge for nearly 52 years, with the Grand Lodge Award of Gold.

"It is our privilege to present this award to someone who has risen to a position of eminence in our craft," Nolton said. "This is an honor conferred upon a brother who is both worthy and esteemed."

Nolton said the Grand Lodge Award of Gold is given to those with 50 years of service to the lodge.

"It wasn't that we didn't want to give this award to you sooner, it was that we couldn't get plans together," Nolton told Ziegler. "I'm glad we finally did. Once upon a time you took on an obligation, and we hope it's made an impact on your life."

Ziegler said it had.

"I really appreciate this award," he said.

Ziegelman worked for IBM in Greencastle from 1961 until his retirement in 1987. He then drove a school bus for Greencastle Community Schools for 10 years.

"He grew up on a Jefferson Township Farm milking Holsteins," Ziegelman's wife of 59 years, Elly.

Ziegelman attended school at Belle Union, where he was a record-setting player for the basketball team.

The Ziegelmans have two daughters, Patti Truax of Cloverdale and Pam Kendall of Greencastle.