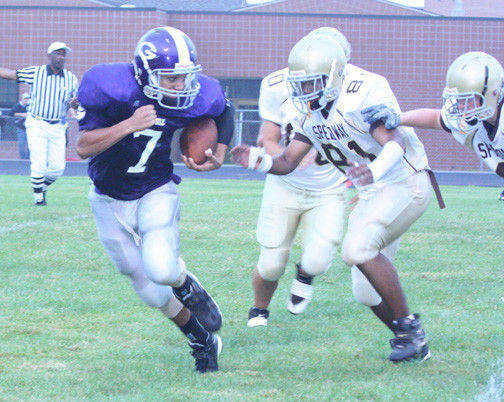 GHS quarterback Jordan Hickam elluded a trio of Speedway defenders during Friday's contest. The Tiger Cubs fell to the Sparkplugs 35-14 and will face Edgewood next Friday.
Order this photo

GREENCASTLE -- With ominous clouds lurking overhead, the Greencastle Tiger Cubs host conference rival Speedway Friday on the gridiron. At such an early stage in the season, the name of the game is improvement and on Friday GHS did just that.

"They played better, we made a lot of improvement from the first week to the second week and if we continue to do that we'll get some ball games I think people don't think we can get," GHS head coach Mike Meyer said following the game.

Despite the loss, the Tiger Cubs moved the ball, made plays on special teams and drew first blood on the night.

The Tiger Cubs' opening drive covered 52 yards and put up the night's first score. GHS primarily moved the ball on the ground, but a Jordan Hickam strike to Keegan Remsburg showed that the Tiger Cubs are far from a one-trick pony. Four plays later, the GHS faithful rose to their feet as Hickam scampered in from 12 yards out, giving the Tiger Cubs an early 7-0 lead.

The Sparkplugs were quick to respond.

Junior quarterback Jonny West tossed three passes for 41 yards, 13 of which resulted in a TD toss to J.T. Bouwman just 51 seconds after the Tiger Cubs' scoring drive. With the kick, Speedway knotted the game 7-all. Speedway scored again before the quarter ended when Michael Hubbard scored with 3:41 on the clock.

The Tiger Cubs were able to move the ball in the second quarter, but found it hard to get inside the 20. After another Speedway score, Hickam led a surge down the field, racking up 28 yards on four carries, but an interception in the endzone left the Tiger Cubs staring at a 21-7 deficit entering the half.

The Sparkplugs came out of the locker room and didn't waste any time to cushion their lead.

Michael Maloian went deep to take the kickoff and 85 yards later Speedway extended its lead to 28-7 They would add another seven at the 6:26 mark when Jake Dunn crossed the goalline for the score.

Keegan Remsburg answered Maloian's return with a big one of his own. Remsburg returned the ensuing kickoff 37 yards to midfield, but the Tiger Cubs were unable to capitalize on their field position.

At the beginning of the fourth quarter, Greencastle got a lift from their special teams play and let the Sparkplugs know they were far from done for the night.

After a stalled drive, Speedway was unable to hold onto the GHS punt, giving the Tiger Cubs ownership of some prime gridiron real estate. Patrick Richardson gained three yards, but it was Remsburg's burst out of the backfield for 18 yards that set up a two-yard Hickam run with 7:55 remaining. With the Parker kick, the Tiger Cubs brought the score to it's finally tally of 35-14.

Hickam gained 95 yards on 25 carries for the evening, with Richardson adding 37 yards on 11 carries. Hickam also passed for 14 yards, while Tanner Battin threw for 25.

West led the Sparkplug offense, going 17-of-21 for 210 yards and two touchdowns. Hubbard led the receiving corps with 93 yards.

Meyer commented that the athletic ability of Speedway is hard to combat. He noted they have many weapons, but his players fought them hard for a full 48 minutes.

"They have some very good athletes on offense that we couldn't really match up with, but our kids kept playing," Meyer said. "They were hustling and running. Yeah, a couple times they didn't look very good, but they kept coming and to me that's the most important thing.

"We saw a lot of improvement this week from last week and that's the key -- as long as we keep improving," he concluded.

Greencastle travels to Edgewood next Friday for a 7 p.m. kickoff.

Next game -- Greencastle travels to Edgewood next Friday for a 7 p.m. kickoff.