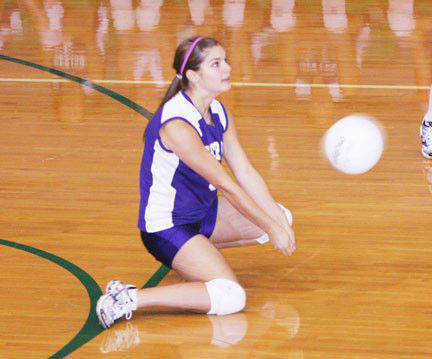 Greencastle sophomore Kara Birt goes low to collect one of her 35 digs during Thursday's contest against Cloverdale.

CLOVERDALE -- Sometimes the journey is more impressive than the outcome. Thursday at Cloverdale, the Clover and Greencastle volleyball teams tangled in a hard fought, five-set match, with the Tiger Cubs coming away victorious. GHS won the contest 16-25, 25-17, 25-15, 13-25 and 15-12.

It's not usual for the fifth and deciding set to be the one with the most intensity, but that's exactly what fans got on Thursday. Both teams took to the court with something to prove and both walked away doing just that.

Greencastle jumped out in front and held control early and took an 11-5 advantage. The Clovers then flexed their muscles and made it clear they weren't going down on their home floor without a fight.

Cloverdale scored seven points to take the lead at 12-11 behind precise sets by Breegan Andersen and some powerful plays at the net by Holly McCammon. Unfortunately, it was a case of too little too late.

Greencastle regained the advantage at 13-12, and then senior Kayla Nobles shut things down with a powerful kill that found the Clovers' floor.

The final set saw both teams buzzing around the court, making plays from sideline to sideline and finding ways to keep the ball alive. It was a breathless finish to a contest that displayed the strengths of each squad.

The Tiger Cubs fell in the first set 25-16 and it looked like it might not be a good night if you were a GHS fan. But a timeout with the score at 18-9 seemed to get the team headed in the right direction. Head coach Trish Lowe noted that she was happy with her team's ability to come back from the first set defeat to win the match.

"What I'm really happy with is, you get beat like that in the first game and you get a talking to that you shouldn't have to get a talking to unless it's from your Daddy," Lowe said. "And they responded. 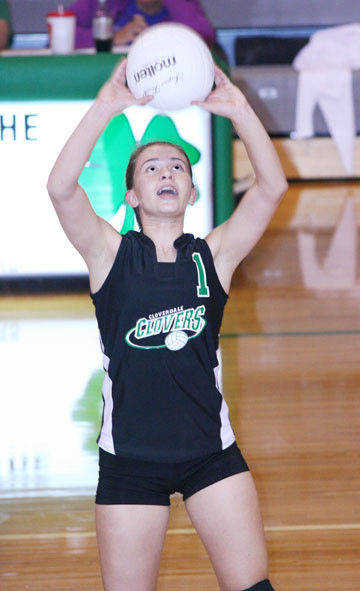 Cloverdale junior Breegan Andersen sets the ball during in Thursday game against Greencastle.

"I'm proud of their integrity and their perseverance. We did a lot of things bad -- a lot of things bad. Fortunately, we didn't give up, hung in there and it was a great match from both team's perspective. If you paid admission, you got your money's worth," she added.

Although the Clovers were unable to come away with the victory, it was obvious they are making strides. Head coach Alisha Polite acknowledged she saw a transformation from her team on Thursday night.

"I saw a lot of girls grow into athletes tonight. They battled," Polite said. "Games two and three we fell apart, but other than that we battled. I saw a lot of growth from my girls tonight.

"Coming off a rough practice yesterday, they surprised me tonight. And to see that growth makes things a little bit easies -- but harder at the same time. We need to learn to finish," she said.

Both teams boast a major presence at the net. For Cloverdale, Bradanne Toney and Holly McCammon provide the firepower, while for the Tiger Cubs it was Chelsea Samuels and Braden Amis. Toney and McCammon combined for 28 kills and 10 blocks, while Samuels and Amis recorded 17 kills and 22 blocks.

For Polite, it's all about growth for the CHS squad. On Thursday, she confessed she finally began to see the team she knows she's had all along.

"I told them, it's not the team that other people expect, but that's the team I expect everyday on the court, because I see it everyday in practice," Polite commented. "Now I think it's finally starting to click. We're starting to turn over a new page and that new is a good thing. I only see good things from here on out. They played smart volleyball tonight."

Greencastle picked up its second win of the season on the night and Lowe felt fortunate. Her team showed the grit and determination it needs to string some wins together with the county tourney lurked just over a week away.

"I am so proud of the team for their effort and perseverance," Lowe said." This was a great match for both teams, either team could have won and I am sure glad it was us. We worked so hard to finish and never gave up."

Greencastle will compete at the Barr Reeve Tournament Saturday at 9 a.m., while Cloverdale will travel to Owen Valley Tuesday at 6 p.m.

Next match -- Greencastle will compete at the Barr Reeve Tourneament Saturday at 9 a.m., while Cloverdale will travel to Owen Valley Tuesday at 6 p.m.