Coats for Kids ready to start its 10th annual campaign 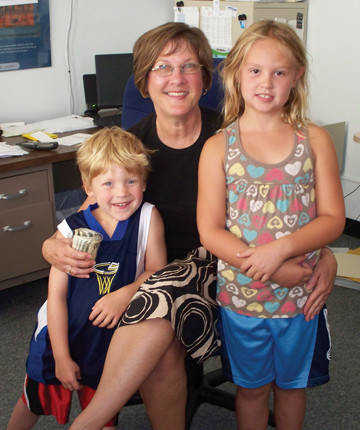 Boyd Ensley (left) and Lilly Richardson (right) collected money from a lemonade drink stand in August and wanted to donate their money to a good cause. The children are seen here delivering their money to Patti Harmless, Coats for Kids Committee member and CASA Director for the PC Youth Development Commission. The children collected $34.25. Boyd Ensley is the son of Catherine & Jim Ensley and Lilly Richardson is the daughter of Samantha and Josh Richardson.

GREENCASTLE -- Coats for Kids kicks off its 10th annual campaign this fall with a goal of collecting over 750 coats for the youth of Putnam County. Yellow boxes began appearing at all county's elementary, middle and high schools, including Area 30 Career Center, Ivy Tech Community College and DePauw University Student Union Building September 8'

The campaign officially began on Sept. 9 and will run through Oct. 9.

New and gently used coats for children of all ages including infant through the teen years are needed. Coats that need to be dry-cleaned will not be accepted.

Coats will be readied for distribution on Oct. 31 from 8 a.m. to 3:30 p.m. at Harris Hall at the Putnam County Fairgrounds. Thanks to Wal-Mart Supercenter, each child will also receive a pair of mittens and hat to go with their coat.

According to Linda Merkel with the Youth Development Commission, a new contest has been added to the Coats for Kids program this year. Called the First Annual Battle of the Schools, it challenges the four county high schools to collect coats.

"Even though the teams, fans and community will be looking for a school victory on the field, off the field we're uniting as one in an effort to provide coats for so many of Putnam County's children. What a better opportunity to promote teamwork through community involvement. The goal is to collect as many coats as possible, while embracing a competition between the two teams," said Merkel.

Members of the Kappa Delta Phi Sorority, along with two wonderful husbands, volunteered their Friday morning to decorate yellow boxes for the annual campaign.

Without the ongoing support and cooperation of so many this program would not continue to be possible. The involved organizations include Putnam County United Way, Wal-Mart Supercenter, Kappa Delta Phi Sorority, Putnam County Extension Homemakers Club, Wabash Valley Goodwill Industries and all the schools, businesses and organizations throughout the Putnam County Community.

If you need further information about this program or would like to volunteer, contact Linda Merkel at the Putnam County Youth Development Commission 653-9342.