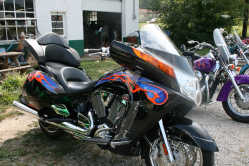 Chris Krampe had 17 motorcycles all painted and detailed by him lined up in front of his business in Manhattan earlier this week. The bikes were being photographed for a feature in Thunder Roads magazine and calendar.

Folks driving east on U.S. 40 in Manhattan Tuesday got to enjoy some unusual art.

Seventeen motorcycles, all painted by Chris Krampe, were lined up in front of his business for a cover shot for Thunder Roads magazine.

Krampe and his shop Krambo's Kustom Kolor will be featured in the magazine along with a spotlight on four of his customers and their bikes, which were painted by Krampe.

Magazine representative Dee Mitchell overheard a conversation between several of Krampe's friends in a Terre Haute restaurant. The men were passing around photos of some of the motorcycles Krampe had painted.

Mitchell asked to see the pictures, explained who she was and got Krampe's phone number and address. She contacted the artist and, after talking to him, set up the photo shoot.

"I had a quarter of a million dollars in my shop last night," smiled Krampe. "I just started calling some of my customers and asking them to bring their bikes over for the shoot. I felt pretty good that so many people would trust me with their $20,000 bikes," he said.

The bikes will also be featured in the Magazine's calendar for 2010.

Krampe isn't sure when the story about his shop will run, but expects it to be in the next several months.

Krampe opened his business earlier this year in Manhattan. He provides motorcycle painting, airbrush, graphics and parts and accessories.