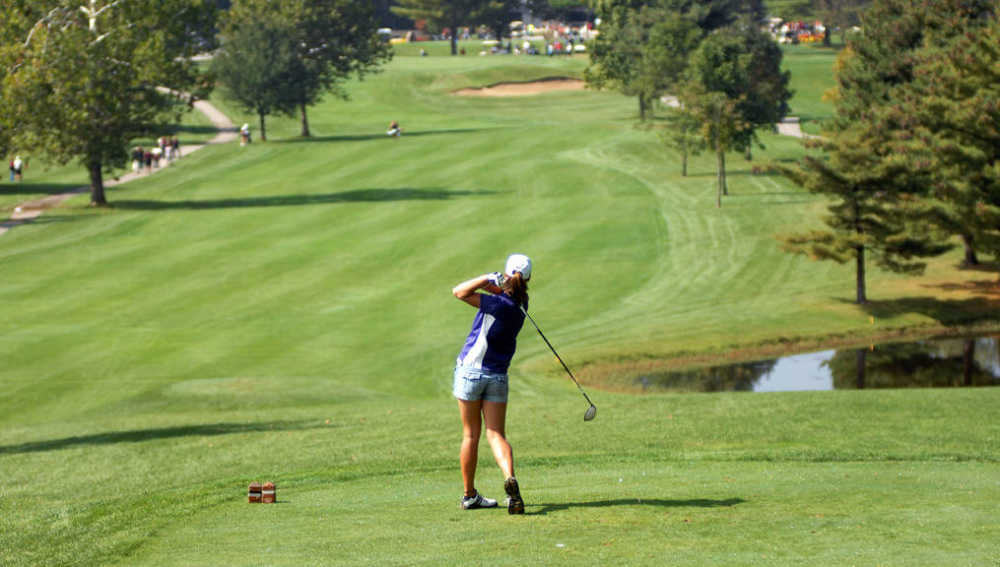 Greencastle's Chelsea Samuels tees off on the nineth hole at Fox Cliff Saturday during the IHSAA girls golf regional.

MARTINSVILLE -- Chelsea Samuels' goal on Saturday at the girls' golf regional was to shoot a better score than she did last year.

And at the end of the day, she had accomplished her goal and nearly earned a bid to the State Finals.

Samuels carded an 85 for the day and at the turn Samuels had a 43, tying for the third lowest score as an individual. She, then, did something her coach, Brad Kingma, said that she has had a problem doing in tournaments -- she finished the back nine -- by turning in a 42 for the last nine holes.

"That was the one thing that she did today, that she hasn't done at any of these tournaments. She finished the back nine, meaning she shot a lower score on the back than she did on the front," Kingma said. "We had the problem last year at sectional and this regional, so when she finished the back nine, that was big accomplishment considering the difficulty is nearly the same for the front and back holes."

Samuels' 85, which is 12 strokes better than her score last year, tied her career best 18-hole score and one of the things that Kingma believes that helped Samuels was her club selection.

"Her club selection was better today than it has been all year long," Kingma said. "She was picking the right clubs, so when she hit the ball she got enough club on it to get it on the green easier.

"She had nine greens in regulation, so that says something," Kingma added.

And for a while, it was looking like Samuels was going to making a trip to the Legends Golf Course in Franklin for the State Finals. But shortly after 6 p.m., the course attendants started to post the scores from the other golfers and that is when it happened. They wrote on the board an 81 next to Terre Haute North's Rachel Welker, one of the people that Kingma was worried about, forcing Samuels out of third and out of the finals.

The most interesting part of Samuels' score is she shot it on a course and in a match, that is much harder than the ones she played in last week.

"I just felt more relaxed today," Samuels said. "I mean I wanted to go to state, but I didn't feel that much pressure to go.

"The experience of being here before helped me with that part," Samuels added.

Samuels also said the practice round that she and her coach did earlier in the week helped out.

"The practice round helped me out a lot," Samuels said. "It helped me by showing me were to hit the ball and how to play each shot."

In her practice round, Samuels carded a 90.

South Putnam's Heather Hughes and Grace Aker concluded their high school careers on Saturday. Hughes finished the day with a 96, while Aker turned in a 92.

"It's all right," Aker said about her round Saturday. "I didn't play as well as I would have liked to and I had a couple of bad holes.

"But other than that I think I ended my career on a good note," Aker added.

When asked which part of the course was harder, the back or front nine, she said the front.

"The back nine is a lot more open and you can get into trouble on the front nine real easily," Aker said.

"This is a tough course and a tough regional and I think both kids played well. And there were a couple of bad holes and other stuff, but for the most part they did a great job," Steffy said. "And yes, it's a little sloppy out here from all the rain, but everybody has to play in the same conditions and some of the shots I saw people were hitting their ball and mud came up with it. But that's just how it was."

Steffy also said that she wanted to thank everybody at Oak Ridge golf course for a good season.

"They are so good to us," Steffy said. "They're so accommodating to us and I know its a little bit of a drive for people in Putnam County, but it's a good course. There good people and its an enjoyable time."