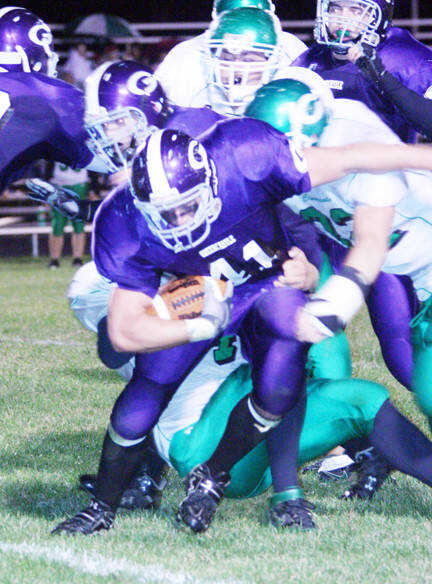 Jesse Ford (41) plows through the Cloverdale line during Friday's contest. GHS won the game 23-13 and Ford rushed for 56 yards and two touchdowns.

GREENCASTLE -- Fumbles are something no team wants to see come Friday night. Greencastle and Cloverdale produced 10 fumbles between them, with all but eight points on the night coming from the turnovers.

The Tiger Cubs earned their first win of the season with their 23-13 victory over the Clovers.

The first half of the game had moments of magic and misery for both squads.

After the Tiger Cubs fumbled on their first play from scrimmage, the Clovers opened the game with a play that made it clear they came to win. Quarterback Jordan Hayden pitched the ball to Jordan Brinkman, who aired it out to Trevor Lockwood for a 41-yard gain. Three plays later, Jeff Couse punched it in from three yards out to give Cloverdale the early lead 7-0.

Both team struggled to hold on to the ball in the first half. The two combined for seven first half fumbles.

Greencastle's big play of the first half came when the Clovers, facing a fourth and three, put the pigskin on the turf. Nataniel Velasquez picked the ball up and rumbled down the sideline for 55 yards, setting the Tiger Cubs up for their first score of the night. Jesse Vermillion scored from two yards out on the next play to knot the score at 7-all.

The Tiger Cubs took the lead for good after the teams exchanged fumbles, committing three in less than a minute midway through the second quarter. GHS drove 38 yards, with Jesse Ford providing the final two and the touchdown with 3:21 remaining before the half.

With their starting quarterback out, Cloverdale turned to Brinkman, who did his best Houdini impersonation on its next possession.

After the GHS defensive line pushed into the backfield, Brinkman escaped from two defenders and streaked down the field for a 30-yard gain. The drive stalled before the half and the teams entered the break with Greencastle holding a 14-7 advantage.

"It feels good, it feels good," GHS head coach Mike Meyer said of the win. "Not a very good first half I think for either team. We were able to come out a get one. We kind of stubbed our toe early, but then that last drive we did some nice things, moved the ball. Those are the things we need to do. We can't get real fancy."

Cloverdale head coach Kyle Winkler addressed the issue of fumbles. He acknowledged the team works on it during the week, but come Friday, it's entirely different.

"Come Friday night, miscue, miscue -- it just kills us. We fumbled the ball to them for the win. It's plain and simple," he added.

The play Winkler alluded to came at the start of the second half as Cloverdale drove the field and looked destined to tie the game once again. The Clovers stood at the six yard line facing, but instead of finding pay dirt, they ball hit the ground and Greencastle took possession.

The Tiger Cubs needed to take the ball 95 yards to score and they did just that. The drive began with a fumble, but after that hiccup, GHS moved the ball down the field and averaged more than five yards per play.

Greencastle took to the air to free up the running game and used an even attack to drive and let Ford scored form two yards out with 5:28 remaining. GHS took the lead 21-7 with the score.

Cloverdale needed a lift quick and running back Jeff Couse provided it for them. On the second play of their ensuing drive, Couse took the ball and slashed through the GHS defense and scored 69 yards later. The two- point conversion failed and Cloverdale was down 21-13.

"That was great," Winkler said. "Jeff (Couse) did a nice job cutting it back. I attribute that to him in practice. We go to the whistle and we make the scout team run them down and our offensive line is used to getting down field 10 or 20 yards, making extra blocks."

The Clovers had one final shot a scoring, but the hopes ended when Codi Duncan brought down Brinkman in the end zone for the safety and the win.

The Clovers committed six fumbles on the night and Winkler didn't hold back after the contest about what the team needs to do moving forward. When asked about the loss of Hayden, Winkler address that, plus other external issues that have affected the team.

"We're missing a lot of starters since the beginning of the year until now. We're scrapping together the best 11 we can put on the field -- the guys that want to play," he commented. "It doesn't help us when we have off the field issues week after week after week. Our kids need to get it in their head, if they want to be a football team; they have to have dedication and commitment. Plain and simple.

"Parents need to drill it in their heads at home, he continued. "We need dedication and commitment. You can't just show up on Friday night and expect to win.

"We don't help ourselves very much sometimes. This is a killer loss. It's us. We have to control the ball. Without our mental mistakes, we have a winning record right now," Winkler concluded.

Following his team's first win of the season, Meyer accentuated the positive, but also noted the team didn't play a perfect game. They'll take the win and get ready for next week.

"Our defense, I thought, played outstanding," Meyer said. "We didn't make any mistakes on special teams. The negative is we turned the ball over too much, but they did the same thing. Fortunately, we came out on top, so I'm very pleased, I know the kids are excited. Now we have to get ready for Cascade and get No. 2."

Greencastle will travel to Cascade, while the Clovers will host Owen Valley. Both games will be Friday at 7 p.m.

Next game -- Greencastle will travel to Cascade, while the Clovers will host Owen Valley. Both games will be Friday at 7 p.m.