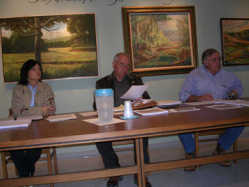 Putnam County Commissioners held their Monday meeting at the Putnam County Museum this week. Artwork at the museum is displayed on the wall behind Kristina Warren, Gene Beck and Jim Baird.

"We're very happy to have you here," Judge Diana LaViolette told commissioners. "We want to showcase this very important part of Putnam County."

LaViolette told the group about a planned spring exhibit regarding the Civil War in Putnam County. She also introduced several board members, including Judge Sally Gray.

In other business, Jim Smith with the Putnam County Highway Department reported that chip and seal work on CR 450 S was complete. He talked about the W. Walnut Street project. One lane will be open during construction with flaggers on each end.

"The road is so narrow we will have to pull equipment out of the road to let cars pass," said contractor Jim Daggy. "We've begun some patching and will be milling out next."

Daggy expects the project to be completed in four to five weeks.

Commissioner Gene Beck reported the commissioners don't have to make any decision regarding a recent Heritage Lake homeowners meeting. Some homeowners wanted to evoke the Barrett Law that would allow a bond to be taken out to pay to pave roads in the area. The cost of the bond would be assessed to homeowners and paid over a period of 10 or more years.

"From the letters and e-mails I got and from the meeting the other night, it looked to me like 95 percent were against it and maybe two to four percent were in favor of it," said Beck.

"It's not moving forward. Let it sit a while and people can take some time to decide. It would have been good for the county -- getting 30 miles of road paved for $3 million. But the people don't want to pay more taxes and I don't blame them," added Beck.

Commissioners also gave tentative approval for Ty Sutherlin to hold an auction on Oct. 24 at 4 p.m. to sell land parcels around the Putnam County Home.

They gave tentative approval to Jack Lawson to auction items from the County Home on Nov. 11 at 6 p.m. The Putnam County Council will have final approval for the auction items. A legal notice must also be advertised 48 hours prior to the sale.

Items from inside the home are being stored in a semi trailer loaned by Wal-mart Distribution at no cost to the county.

A discussion took place concerning the number of bodies buried in a cemetery behind the county home. A report turned in to commissioners cited 57 confirmed bodies in the area.

However, since that meeting on Monday, County Planner Kim Hyten and Larry Tippen have found bodies in an area covering two to three acres.

"That could mean 150-200 bodies buried there. Records weren't kept in the early days of the county home, so there could be some older bodies there," said Hyten.

The cemetery site will be fenced in and will not be included in the land parcels for sale. The area is currently being used as pasture.

Hyten is hoping to locate a university or group willing to investigate the area and come up with some final body counts.

In other business, commissioners agreed to move forward with providing county employees with direct deposit through Old National Bank. Employees can choose to participate or not.

A bill presented last month by the Clear Creek Conservancy was tabled until engineering plans are submitted to commissioners.

"My biggest concern is they didn't ask our permission to work on our road. It also wouldn't have cost us as much to pave the road," stated Beck.

The bill is for paving 65 feet from Heritage Drive back to Betsy Ross Road. Cost for ten tons of paving materials was $930.

Putnam County Commissioners regularly meet on the first and third Monday of the month at the county annex.