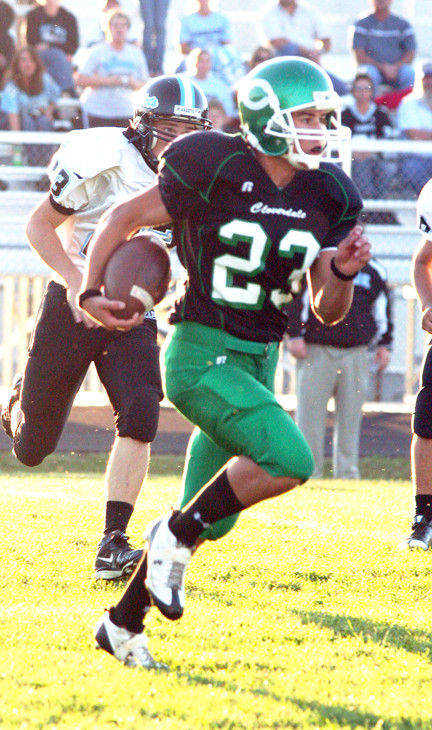 CLOVERDALE -- After Owen Valley controlled the ball for the opening 11 minutes to Friday's contest at Cloverdale, it was clear the Clovers would have to make every possession count.

Owen Valley controlled the time of possession for the game and came away with a 14-0 win over the host Clovers.

Cloverdale was outgained by the Patriots 68-19 in the first quarter with the Clovers only running two plays in the opening 12 minutes. Owen Valley moved the ball up the field by eating up yardage in the middle of the field, something Cloverdale head coach Kyle Winkler was clearly displeased with following the contest.

"Every week it's the same thing," he said. "We're in the game, in the game, in the game and then at the end they drive down the field. We just have to come together as a team and figure out how to play hard every play, because it's that one play a kid takes off -- boom it's right through his spot and they're gone for a 14-yard gain instead of a four-yard gain."

After Owen Valley's initial strike, the Cloverdale defense kept the Patriots out of the end zone until the dying minutes of the fourth quarter and put together a couple of impressive drives themselves.

Late in the second quarter, Cloverdale began to match the ball down the field with big runs from Jeff Couse and starting quarterback Jordan Hayden. Hayden was also able to connect on two tosses for 28 yards.

Cloverdale face a fourth and two and converted when Couse pushed forward for three yards. Two plays later, Couse took to the sideline and snaked his way through the Owen Valley defense for a big gain, however, the play was called back for holding.

The half expired with the Patriots leading 7-0.

Winkler commented that his team needs to get in the mindset that they are a worthy adversary no matter who stands on the opposing sideline. He also noted they also gain control over the mental aspect of the game to achieve the success they desire.

"Cloverdale needs to learn we can play with everybody," Winkler said. "The mental mistakes are always against us. One penalty for 10 yards, one penalty for a hold when we're coming down in the second quarter that kills the drive, we're driving again and boom.

"Mental mistakes has killed us every game. After week three, we've been in every single game until we make mental mistakes. A fumble, jump offsides, holding call -- it kills us," he added.

On their first possession of the quarter, Cloverdale lost five yards on a rushing attempt, putting them in a hole. Hayden dropped back and sent a pass to Trevor Lockwood, who snagged the ball by his fingertips for an eight yard gain. They had to kick the ball away after failing to convert on third down.

Owen Valley moved the ball down the field, covering 72 yards in 12 plays and recorded the final points of the ballgame at the 1:56 mark on a Jonathan Hershberger four-yard score.

Facing a long field and a large deficit, Cloverdale took to the air once more, with Hayden connecting with Lockwood for 37 yards. Unfortunately, on their next play Gryfen Brinson picked off Hayden and the game ended with Owen Valley winning 14-0.

Looking back at the game, Winkler spoke about Owen Valley's opening drive and what the team needs to do as his host county and conference rival North Putnam.

"Eleven minutes off the clock in the first quarter, just going right up the middle of our defense says a lot about what we need to change," Winkler noted. "We cannot stay in there in a traditional 5-2 front against anybody; it's been eight weeks now. We're going to change something up for North Putnam because it's going to be a flying circus.

"Their quarterback (Kolten Everts) can put it on the money and they have some great running backs. That No. 1 (Shawn Diebold), he's the fastest kid out there, so we're going to game plan the best we can. I need to get 11 kids that are dedicated to playing football throughout the week," he said.

Cloverdale will travel to North Putnam for a 7 p.m. kickoff.

Next game -- Cloverdale travels to North Putnam Friday at 7 p.m.