Myers Dinner Theatre presents 'A Dickens of a Christmas' 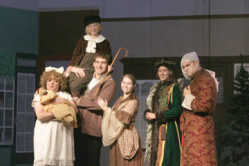 The Cratchit family (l to r: Linnea Leatherman, Madeline Hepburn, Keith James and Kayla Bennett) make the most of their meager Christmas as the Ghost of Christmas Present and Scrooge (Jenni House, Michael Moyer) look on in "A Dickens of a Christmas" opening at Myers Dinner Theatre in Hillsboro Friday.

HILLSBORO -- Myers Dinner Theatre will open the original musical comedy "A Dickens of a Christmas" on Friday, playing the show through Dec. 23. There will be matinees on Wednesdays and Sundays and evening performances on Fridays and Saturdays. There are also a couple of special matinee performances on selected Saturdays.

Groups can call the reservation line for information on adding additional performances.

The musical, co-authored by Michael Jones, an Indianapolis actor and Dickens scholar, and MDT regular Michael Moyer, is a retelling of Charles Dickens' holiday classic, "A Christmas Carol," but with one twist.

While cleaning up his study, Charles Dickens' housekeeper accidentally mixes his manuscript for "A Christmas Carol" in with manuscripts for some of his other novels. Suddenly, Scrooge finds himself the owner of a retail store during the holidays and is confronted with familiar characters such as Oliver Twist, Fagin and Miss Havisham in his life story.

They all help Scrooge to realize the true meaning of Christmas by showing him his past, present and possible future. Songs include familiar carols such as "Deck the Halls" and "God Rest Ye Merry Gentlemen," modern Christmas classics like "Somewhere in My Memory" and "Christmas Day," as well as high-stepping dance numbers like "We Need a Little Christmas," "Christmas Dream (a rare Christmas song from Andrew Lloyd Webber)," and "Turkey Lurkey Time."

Director Michael Moyer, Indianapolis, who also plays Scrooge, has assembled a wonderful cast for the Myers Dinner Theatre production, each of whom plays a wide variety of roles and displays the stunning costumes for which Donna Myers is known.

Linnéa Leatherman, Indianapolis, has been with MDT since the Christmas show of 2005 and since that time has appeared in, co-written, directed or music directed for every production but one. Kayla Bennett, Linden, is a Millikin graduate who has appeared in "The Secret Garden," "The Mousetrap" and "Kiss Me, Kate," as well as being MDT's

Marketing Manager. Jenni House, Bloomington, is a professional actress who has been seen in the MDT productions of "Beauty and the Beast" and "Joseph and the Amazing Technicolor Dreamcoat." Keith James, Crawfordsville, is a recent North Montgomery High School graduate who appeared at MDT in "My Fair Lady," "South Pacific," "Beauty and the Beast" and other shows. Madeline Hepburn is a nine-year-old who played Colin in the MDT production of "The Secret Garden."

Tickets for "A Dickens of a Christmas" can be reserved by calling the Myers Dinner Theatre office at 765-798-4902, ext. 2. Cost is $39.95 for dinner featuring a prime rib buffet, show and dessert (tax and gratuity not included).

Dinner for the evening shows begins at 6:30 p.m., for the weekday and Saturday matinees at noon, and for the Sunday matinees at 1 p.m. For more information visit the MDT website at www.myersdt.com. Myers Dinner Theatre boasts wonderful, microphone-free acoustics and is totally handicapped accessible.