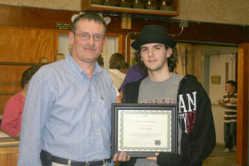 Eric Austin, left, sponsored the Spirit of 4-H Award bestowed upon John Sims Saturday during the recognition program. Sims is a 10-year member of 4-H and currently a freshman at Indiana University. He was also given a $500 savings bond.

GREENCASTLE -- What is the spirit of 4-H?

"(John Sims) is what the spirit of 4-H is about," said Extension Educator Mark Evans. "He took the time to help others, especially during camp."

Sims was honored with the Spirit of 4-H award Saturday during the recognition program.

His projects over the years have included ceramics, model aircraft, shooting sports and being a junior leader at camp. The work and effort he put into his 4-H projects has carried over to his college studies at Indiana University, where he is a freshman.

While he doesn't have an exact degree in mind, Sims has been studying Russian and next semester will be taking an intensive introduction to Italian course.

"The history of languages has always interested me," he said.

What he remembers most about his time in 4-H was camp -- six years as a camper and two years as a junior leader.

Sims admitted he will miss 4-H and going to the fairground during fair time will not be the same.

"Thank you considerably (for the award)," he said to sponsor Eric Austin.

Austin said he chose to sponsor the award this year, which has been sponsored by Bittles and Hurt Funeral home in the past, because of the long-standing commitment of the Hurt family to 4-H.

"4-H has impacted my family," Austin noted. "My wife was a 4-H member and it allowed her to attend Purdue University, where she studied to be a nurse."

In addition to Sims, several other 4-H members and leaders were recognized during the program for their hard work. Evans honored Shea Mahoney-Sutherland, Tyler Haven and Grace Aker as Key Club members during the program.