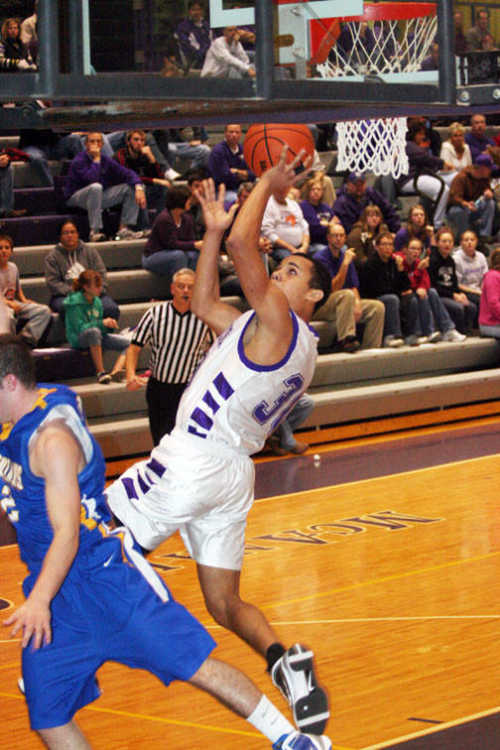 Greencastle's Jordan Hickam twists to get off a shot against a Crawfordsville defender in the second half of Wednesday's contest. The Tiger Cubs fell to the Athenians 58-54.

GREENCASTLE -- For three quarters Wednesday in their season opener, Greencastle boys' basketball looked well on its way to picking up the win. One quarter later, the Tiger Cubs suffered a 58-54 loss to Crawfordsville.

It wasn't so much the loss that stung GHS head coach Troy Greenlee, it was more the way it happened. The game was one of surges, but Greenlee felt his team didn't accomplished what they set out to do.

"Well, I told the guys, I'm not angry with them, but I'm a little disappointed in some of the way we handle situations on the floor," he said. "I just thought at times, that we kind of lost our poise a little bit and I thought we really allowed them to dictate the pace of the game. I really anticipated that we would be a team that could do that, but obviously tonight that didn't happen.

"That was a little disappointing. I thought we fought hard at times and there at the end, we had a chance. We put ourselves in a position to win the game, but we shouldn't have ever been in that position," Greenlee added.

Greencastle did find itself in a position to get the win, but a late turnover and timely free throws from Crawfordsville's Trent Crabtree sealed their fate.

Late in the fourth quarter, GHS was down eight points at 54-46, but some scrappy play under the goal by Tyler Lewis and Nick Hutcheson helped the Tiger Cubs battle back to close the gap to two points with 6.8 second remaining.

Following Luke Wren's two missed free throws, Greencastle began to push the ball upcourt, but Crawfordsville was able to apply pressure and get a traveling call. Crabtree was fouled and connected on his seventh and eighth free throw of the fourth quarter to preserve the win. Crabtree went 8-for-8 at the line in the fourth quarter and 12-for-12 in the second half.

"Probably the most disappointing thing, like I said, is that we allowed them to dictate the pace of the game on both ends of the floor," Greenlee commented. "Defensively, I really think they made us do what they wanted us to do and the same thing on the other end -- they were able to do what they wanted to do on the offensive end."

The Athenians went to the foul line 26 times on the night as opposed to Greencastle's 16. With tall inside players, surprisingly Greencastle wasn't able to visit the free throw line in the second or third quarter, which is something Greenlee addressed following the game.

"That's one thing that we've talked a lot about," he said. "Again, I think the reason we didn't go to the line as much we hoped, is they were able to dictate what we did. They did a good job of staying down in their stance and guarding us as we tried to drive it.

"They did to us tonight what I thought we would be able to do to other teams. That's disappointing and I really anticipated that we would have been going to the line a lot more, so that's something that we're going to have to look at," Greenlee said.

Greencastle lost the opening tip, but used some first game fire to jump out to a 13-4 lead early, but watched as Crabtree took over and helped lift Crawfordsville to a 21-17 lead after one quarter.

The Tiger Cubs' defense came up huge in the second quarter, limiting the Athenians to just four points.

Offensively, Greencastle got big buckets from Nick Hutcheson and Eric Embry to support a 12-point surge to enter the half with a 29-25 lead. Greencastle clung to a one-point advantage as the teams entered the fourth quarter at 41-40.

Greenlee pointed out there were things he was pleased with, but pointed out the team couldn't overcome too many mental and physical mistakes to win the game.

The Tiger Cubs had their hands full with Crabtree all night long. The junior poured in a game-high 31 points to lead Crawfordsville. Last season, Crabtree wreaked havoc from outside, and on Wednesday he attacked the goal every chance he got, something that caused the Tiger Cubs problems.

"He's a really good player and he really made it hard on us. When a guy's able to drive it like that and still be able to create things for himself and his teammates, it made it hard to guard for us, so we really need to improve in that area, as far as guarding drivers," he said.

Greenlee also acknowledged that while he was pleased with some aspects of his team's performance, there were other areas that were cause for concern.

"Effort is A-number one when it comes to playing this game," he explained. "If you can't rely on your kids to give the best effort they can give, then you're going to have other problems throughout the year. That's one thing, again, I thought in spurts we showed some effort and went at it pretty hard, but what hurt us were the lapses.

"I saw a couple times where they were pushing it down the floor, and instead of sprinting back we were jogging back. Maybe the average fan won't notice that as much, but as a coach that's huge. That's so basic to basketball -- just sprinting down the floor," he said.

He noted that with a guard the caliber of Crabtree, if a team isn't able to get back on defense, that they will score most of the time.

Greenlee said he's confident that the team will evaluate what happened in their first outing and adjust accordingly.

"We'll regroup, and I really like this group of kids. They're not going to quit on us. They're going to come in here next practice and do some things that we want them to do," he concluded.

Greencastle will next be in action in next Friday's Putnam County Classic.

Next game -- Greencastle will next be in action in next Friday's Putnam County Classic.