Old Dogs less than sum of its parts 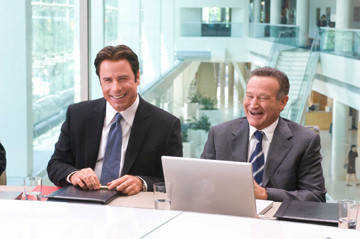 Walt Becker's Old Dogs is a fluffy flick that has some laughs throughout, but suffers greatly from sluggish and very predictable storytelling. It's a story with peaks and valleys and unfortunately, the valleys win out.

Fresh off his divorce, Dan (Robin Williams) is whisked away to Miami by best bud and business partner Charlie (John Travolta). The duo swim in a sea of liquor, make a stop at the tattoo parlor and meet up with two women.

Dan's newly tasted freedom is short-lived as he quickly marries Vicki (Kelly Preston) in a booze-fueled fiasco. Coming to his senses, the marriage is annulled and Dan is free to go on with his life as before.

Cut to seven years later and Dan stands on the brink of the biggest business deal of his career when he receives a call from Vicki. As they meet for dinner and Dan believes they might start a new life together -- enter his seven-year old fraternal twins Zach (Conner Rayburn) and Emily (Ella Bleu Travolta).

When he learns Vicki must go away for two weeks and the babysitter she had falls through, Dan enlists the help of Charlie and takes on the biggest challenge of his life -- caring for his two kids for two weeks. It's easier said than done.

As the days tick away until Vicki's return, Dan continues to attempt to be the father they need, but things go wrong at every turn, including a failed camping excursion. Dan finally has a breakthrough with Emily when he's able to drop his inhibitions and tells her that he'll always be there for her.

Unfortunately, Dan and Charlie's Japanese business deal goes south when the liaison they send goes missing and the head of the company wants the duo to finish the project themselves -- in Japan. Now Charlie has to make the decision on what is most important -- the business deal he's waited a lifetime for or the two children he just met.

I was surprised at how forced the comedy was in this movie. The times where it flows, the movie is really funny, but for the most part it's stiff and doesn't translate to the audience well. Seth Green has some silly moments, but you can only take so much.

While the lead actors have some fine moments, it's Justin Long as a slightly off-center camper who steals the show. That seems to be Long's job in Hollywood. The guy slides in, makes those around him look like chumps, and giggles straight to the bank. Don't be surprised if more people catch on to this and we see Long in around 75 movies next year.

Another choice I think Walt Becker shouldn't have went with was in a dinner scene, he placed Travolta and his daughter facing each other. Although we know their relationship is in real life, it really hurt the story progression because they look so much alike. It's hard to accept her as Williams' daughter after something like that.

In interviews, Travolta, Preston (his wife) and Ella Bleu have spoken about the joy they had being in a movie together and that is the most important thing. A lot of times people, myself included, forget the films are all about fun. Sometimes there's a message to be taken, but for the most part it's explosions, hilarious hijinks and super cheesy dialog. Even with that in mind, this movie is a tough sell.

Final Cut: There will be moments in Old Dogs where you will find yourself doubled over with laughter, but those moments are few and far between. The film has cuteness to it, but I think a lot of that credit goes to Ella Bleu. While she isn't afforded the chance to show much in Dogs, she's able to show she can kill with her eyes and in acting -- that's half the battle.