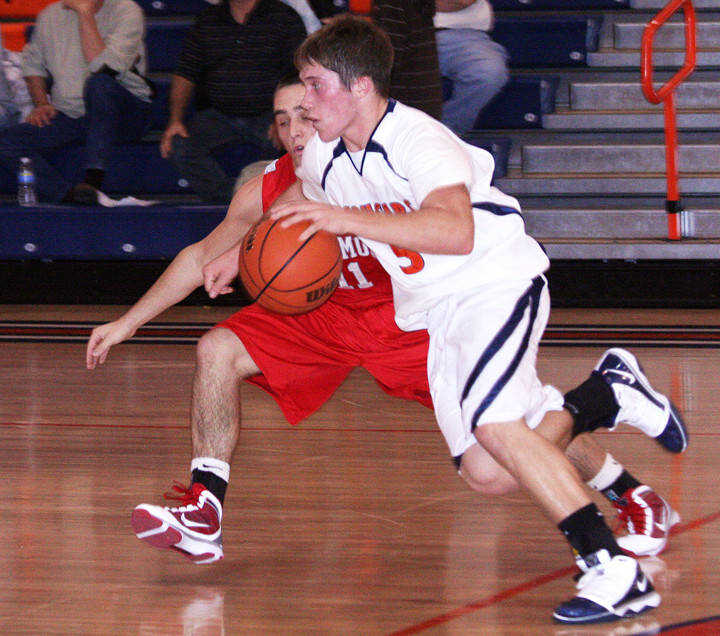 ROACHDALE -- For any team to win a high school basketball game, it has to play all 32 minutes and the North Putnam High School boys' basketball team realized that Wednesday night.

The only problem was that it realized that one quarter too late.

The Cougars dropped their home season opener to Southmont, 77-52, and it was the second quarter that sealed the Cougars' fate.

Going into the second period, North Putnam trailed the Mounties, 22-19. They hit 47 percent of their shots on 8-of-17 shooting, but a dismal second quarter put the Cougars into a hole that they couldn't claw their way out of.

Southmont outscored the Cougars 20-5 in the second. North Putnam didn't score its first points of the quarter until there was 2:30 left in the half when Travis Franklin converted a three-point play after driving the lane for the basket and converting the free throw.

"You can't play 16 minutes or 24 minutes, you have to play 32 minutes to win a game," NPHS coach Nathan Martindale said. "In the beginning we were executing our offense and doing what we wanted to and we were patient with our offense. Then in the second quarter, they made some adjustments in the their defense and we started to get a little too anxious on our drives. We started to not rotate the ball with our offense and that hurt us."

Take away the second frame of the game and North Putnam played a solid game. The Cougars matched the Mounties point-for-point, 16-16, in the third with James Hedrick scoring nine of those16 points on 4-for-4 shooting. North Putnam also cut its turnovers down from 12 in the second to only seven in the third.

In the fourth quarter, North Putnam's offense continued to click, hitting its shots in the lane and converting more of their free throws. But it wasn't enough. Southmont continued it scoring frenzy, outscoring the Cougars 19-12 for the final.

"You take away that second quarter and I thought we played really well," Martindale said. "The bottom line is that you have to play all 32 minutes and once we start doing that -- I like where we are headed."

The Cougars will be back in action on Saturday when they travel to North Vermillion for a 6 p.m. game.

Next game -- The Cougars will be back in action on Saturday when they travel to North Vermillion for a 6 p.m. game.