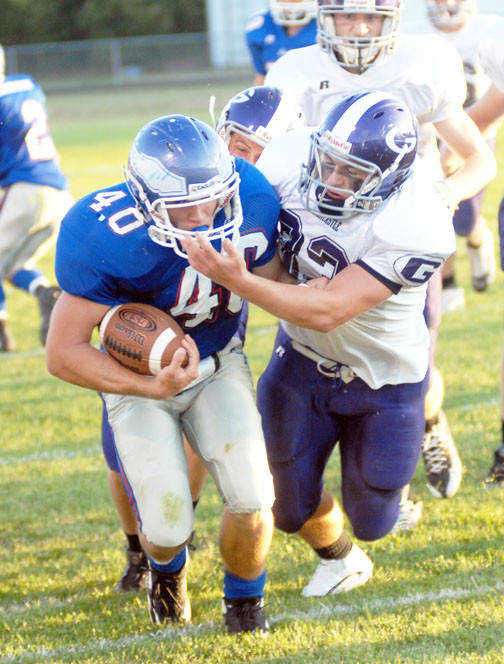 South Putnam's Drew Cash (40) and Greencastle's Jesse Vermillion (right) were named the Offensvie and Defensive All-County Players of the Year.

GREENCASTLE -- When team faced the South Putnam Eagles this season, they knew it would be physical, it would be tough and they would see a lot of No. 40 Drew Cash blasting out of the backfield.

He led the 8-3 Eagles with an average carry of 5.1 yards per rush and amazingly had just 15 rushing yards for a loss. He also handled punting duties for the squad. Cash is one of nine Eagles to make the All-County team.

On the flip side, when foes faced off against the Greencastle Tiger Cubs' defense, they knew that one player would be licking his chops; ready to pounce on anything that came near.

Vermillion has been selected the 2009 Putnam County Defensive Player of the Year. Vermillion is joined on the All-County squad by four of his Tiger Cub teammates.

At the helm of the Cougar offense, Everts passed for 865 yards and four touchdowns this season. He averaged 72 yards per game through the air and 30 on the ground, while collecting five rushing touchdowns.

Adams and Franklin teamed up for 478 yards and a touchdown for North Putnam.

Bryan led the team with 93 tackles, followed by Spencer's 78 and Boruff's 62. Kratt was selected as the special teams player.

In addition to Cash, South Putnam put nine players on the team, including five on the offensive side.

Chestnut led the team in receptions and yards with 21 and 308, respectively. He also hauled in six touchdowns. Jake Gould was selected at kicker.

Greencastle earned five selections, four of which came from the offensive side of the ball.

Nataniel Velasquez was selected at guard, with Keegan Remsburg being selected at wide receiver, Jesse Ford at running back and Jordan Hickam being named the offensive at-large.

Ford rushed for 410 yards on 104 carries and scored two touchdowns for the Tiger Cubs in the '09 season.

Matt Hall was the team's top tackler with 77 total, including 46 solo tackles and two sacks. Jordan Brinkman had 59 tackles for a six tackle per game average and caused two fumbles, while Rob Gibson collected 32 tackles on the season.

Dillin Gray was the leading rusher for the Clovers with 572 yards on 121 carries and had six rushing touchdowns. Jaquan Moore was Cloverdale's punt specialist with a 33 yard per punt average. He amassed 1,257 yards on 38 punts.