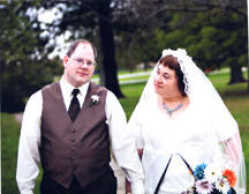 Kendra Smith and Scott Crouch, both of Indianapolis, were married recently in a ceremony at the Ballroom of the Post Road Banquet Center in Greenwood.

The bride is the daughter of Brian Smith of Bainbridge and the late Lu Gibson Phillips. Her stepparents are Rich and Kim Phillips of Sheridan.

The groom is the son of John and Beverly Crouch of Columbus.

The bride wore the veil worn by her mother and a bracelet belonging to her great-grandmother Oreta Ratcliff. The bride's sister Lisa McSpadden served as matron of honor. Bridesmaids were Carolyn Webber, aunt of the bride; and Suzy Griffith, sister to the groom.

Best man was John Dollarhide, best friend to the groom. Groomsmen were Rusty Griffith, brother of the bride; and Cody Griffith, nephew of the groom.

Mr. Crouch is a graduate of Columbus East High School and attended Vincennes University. He is employed by Heritage Environmental.

The couple reside in Greenwood.