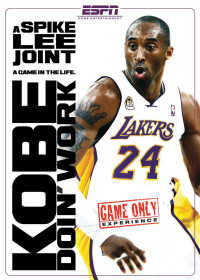 The Spike Lee documentary Kobe Doin' Work follows a day in the life of NBA superstar Kobe Bryant. What sounds like a boring premise turns out to be an in-depth look at the intricacies of the NBA game from one of its premiere athletes.

The 83-minute film follows Bryant for the Lakers' contest with the Spurs on April 13, 2008. Lee was granted special access by the Lakers and their head coach Phil Jackson and brings a surreal experience to the screen.

The action was captured by 30 cameras and includes footage of Bryant before and after the game, as well as the sanctuary of the Laker's locker room at halftime. It gives us a just a tiny glimpse into the world of the NBA.

What makes this film special is the fact it focuses on a single player and not a team. We're able to hear Bryant break the game down play-by-play, player-by-player and thought-by-thought. Although the game is one of instinct, it is amazing to listen to Bryant explain why he passes on shots early on and how he inspires teammates.

For people going into this film with little knowledge -- it is nothing more than what it advertises. There are no sitting alone in a room, fake smiling into the camera, interview segments, just Bryant tearing up the court. It's simple, but it's great.

Bryant provided the commentary following his 61-point performance against the Knicks on Feb. 2. The commentary is not for young ears though; F-bombs are littered throughout, so if you're opposed to course language, I recommend opting for the non-commentary presentation.

I've never been a huge fan of Lee's, but this film is a work of art.

Final Cut: Kobe Doin' Work is a fascinating documentary that delves into the subtleties of the game of basketball. Lee mixes game footage with nice freeze frame work to give a great viewing experience. Very cool flick.