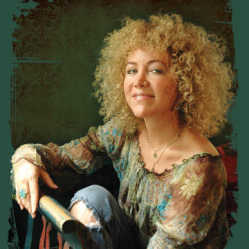 PLAINFIELD -- As we ate our dinner Saturday night at Chateau Thomas Winery and waited for Jennie DeVoe's concert, one of my tablemates described her music perfectly.

"Jennie and wine go hand in hand. It is wine-drinking music," she said.

When DeVoe took the stage, I knew exactly what my neighbor was saying. DeVoe's voice has a touch of sweetness, a touch of tart. It pairs perfectly with a number of genres, which is why critics like myself have a hard time classifying her music.

Most of all, her voice has a depth you might not notice at first. But take a few more sips, and you begin to get a better picture. There is soul in her voice -- a depth of passion and emotion we all want from our music.

Given the intimacy of the show, she simply took the stage with her band and no introduction. Instead, she chose to introduce herself. In turn, she thanked herself for the introduction.

It's the kind of moment that immediately endears DeVoe to her audience. While I know there were other first timers like myself in the crowd, it seemed that many others were devoted followers. For them, this wasn't so much a concert as sitting down and visiting with an old friend.

And they weren't disappointed. What they got from a DeVoe show was not only a rockin' bluesy, folksy mix of tunes; they got stories; they got jokes. They got a nice visit from someone they know and love.

Like any good friend, DeVoe was keenly aware of where she was and with whom she was dealing. When she took the stage shortly after 7 p.m., the crowd was still finishing dinner, eating, talking, sipping wine or waiting in line at the bar.

With this in mind, she offered a mellow collection of tunes. None of the early songs were overpowering unless you chose to let them overpower you.

As she neared the end of her first set, though, she had a little fun with the early '70s Melanie Safka hit "Brand New Key" and really got the crowd into it. She closed the first set with a wonderful, sparse arrangement of her song "Map of the World," and then "Butterfly," which she called her favorite song off of her album Strange Sunshine.

At the break, she further showed what endears her so much to her cult following in central Indiana. Rather than going somewhere to hide out, have a drink and rest, she spent most of the time still on stage, visiting, signing autographs and just enjoying the company. The same thing happened after the show.

After opening the second set with several nice offerings (highlighted by the classic "Blue Christmas" and her own "Believers"), she had some fun, singing Led Zeppelin's "Ramble On" and "Whole Lotta Love."

Now, a lot of people cover Led Zeppelin. Very few of them do it well. DeVoe, along with bandmates Brett Lodde (guitar), John Wittmann (drums), Greg McGuirk (keys) and Jeff Stone (bass), were equal to the task. These songs were written and originally performed by some of the greatest rock musicians of all time, and I can find no complaints about the reproduction of DeVoe and Co.

She also shared with the crowd her idea of playing the Vogue and doing Zeppelin tunes for an entire show.

"I could wear skin tight pants and sing about girls all night," DeVoe said.

Other nice covers from the second set included "When a Man Loves a Woman" and the closer, "Purple Rain," both of which were pulled off wonderfully.

The real draw to the show, though, was DeVoe's original music. Most of the night was drawn either from Strange Sunshine or the limited-edition release Blue Sky Radio Hour, both of which came out earlier this year.

Both releases, along with DeVoe's three earlier studio albums, are well worth picking up, but DeVoe's real strengths are as a live performer. A disc may capture her delightful, smoky voice, but it can't capture her stage presence.

Best of all, seeing that stage presence isn't difficult. DeVoe is a Muncie native now based in Indianapolis, so she plays lots of shows around central Indiana. If you have the chance, see her live. You won't regret it.