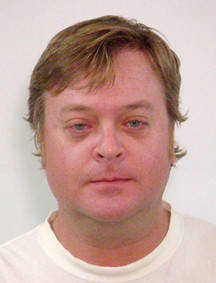 Frisbie, 38, was booked into the Putnam County Jail and charged with misdemeanors operating a motor vehicle while intoxicated and public intoxication, Sgt. Rich Myers of the Putnamville Post of the Indiana State Police said.

Frisbie was pulled over by Indiana State Police Trooper Michael Wood on U.S. 231 at Tennessee Street in Greencastle.

"He was driving erratically," Myers said. "He went off to the right on the road, then he went left of center. When he turned onto 231 from Veteran's Highway, the turn was abrupt."

Myers declined to reveal what Frisbie's exact blood alcohol content was at the time of the arrest.

"We don't release the results of testing," he said. "What I can say is that (Frisbie) was over the legal limit, which is .08 percent."

Sgt. Tyler Turner of the Putnam County Sheriff's Department said Frisbie posted a $3,000 surety bond and was released from jail at about 5 p.m. Saturday.

"The reports had all been forwarded to the prosecutor," Turner said.

Frisbie is currently on federal probation. He was convicted in November 2008 of federal program theft, and entered the United States Penitentiary satellite camp in Atlanta, Ga. on Feb. 2. He was released from the camp on March 31, and served four months on home detention before beginning his two-year term of probation.

Frisbie could have been sentenced to 10 years and prison and been assessed a $250,000 fine for the federal charge. He pled guilty to that count in August 2008, a week after he resigned as Putnam County Sheriff.

"That will be up to his federal probation officer," Long said. "In the grand scheme of things, these are pretty minor charges. They may not do anything."

Frisbie will be in Putnam County Circuit Court at 9 a.m. Wednesday for an initial hearing on the new charges.

Comments
View 29 comments
Note: The nature of the Internet makes it impractical for our staff to review every comment. Please note that those who post comments on this website may do so using a screen name, which may or may not reflect a website user's actual name. Readers should be careful not to assign comments to real people who may have names similar to screen names. Refrain from obscenity in your comments, and to keep discussions civil, don't say anything in a way your grandmother would be ashamed to read.