Waynetown museum is unexpected pleasure in middle of nowhere 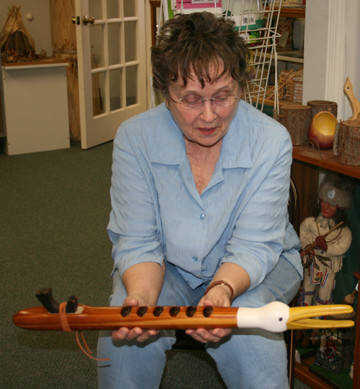 Joyce Jones, owner of the Mid Town Museum of Native Cultures, plays her flute at the museum located several miles west of Crawfordsville.

WAYNETOWN -- Unexpected pleasures are not always easy to define, but the perfect example of one is the Mid Town Museum of Native Cultures in downtown Waynetown. This small hidden treasure lies about 40 miles north of Greencastle in a spot that gets barely more than a passing glance.

Eight years ago, Joyce Jones was carting tubs of her unique Indian artifacts to school classrooms all over Montgomery County. One day she decided the best thing would be to put it all together in one place and let the children come to her.

She has dioramas of different Indian villages and homes, one-of-a kind gourd art, native music and instruments, full-size mannequins in Indian regalia, books, a gift shop, plenty of history and stories and even a few spirits.

There are all kinds of spirits, many of which have been documented by investigators and whose voices can be heard on tapes.

The spirits are just a sidebar of what this museum means to Jones and her friend Lori Clements.

Both women have Indian ancestry and many Native American friends. Jones helped to excavate nearby Fort Ouiatenon, a fur trading post built in the mid 1700s on the Wabash River just outside Lafayette.

"Everything has a spirit to the native people -- trees, people, even the earth. Everything has an energy or fire to it. Why wouldn't it live on?" questioned Jones.

In fact, Jones says one of her oldest native friends is present in the museum even though he passed away several years ago.

"I know Bill is here. He leaves messages that no one else would. He always wore bells. I would hear them in the woods at Powwows and meetings," said Jones.

Last weekend, Jones had a group of paranormal investigators coming to the building to make more recordings of activities. There have been several groups in to check out the activity in the building.

But talking about spirits is not Jones' first priority. The museum is dedicated to the original caretakers of this nation with the main stress on educating existing and future generations.

When Jones talks about the true Indian stories, she becomes passionate about their treatment at the hands of the United States government. She talks about the Trail of Tears when thousands of Native Americans were forced from their land and made to walk to Oklahoma.

"Thousands died on the trail, but the whites did other things to wipe out the native populations. They helped spread illness among them. They would take their children to live among the whites. When one would get ill, they would send them home to infect all the others in the village," said Clements. "They had their own weapons of mass destruction."

More important to Jones is teaching people the ways of the Indian, such as showing them how totem poles display Native American genealogy.

"They were great inventors. We show kids the "poop pet." It's made from horse manure and dried by the plains Indians," smiled Clements.

Ask Jones to play one of her many flutes and she will blow a haunting tune and then explain that women were not supposed to have the instrument.

"Every flute has its own voice. Each man had their own instrument and created their own tune to attract a wife. If a girl touched the flute, it would scare the spirit out of it and the man would not get his girl," explained Jones.

Oddly, one of the electronic voice phenomenon (EVP) recorded by an earlier paranormal investigator has the sound of a flute playing in the background. Drums can also be heard.

"The tune sounds like the one they played in the movie Wind talkers," said Jones. "We found out later that the flute was made by the same man who made the one used in the movie."

Jones has always been interested in Native American culture. She pops up constantly with stories about the people she loves. One such tale is that of a young Cherokee who died of milk fever. Another is that of a young woman taken as a child from Fort Parker, Texas, along with several other children she was stolen away in the night.

The other kids were bartered back, but Prairie Flower was kept. She was raised among the Quahada tribe (known as Antelope Eaters), married and had children.

Later she was discovered by the whites and returned to Texas, where she starved herself to death after her daughter died.

"You can see how similar the Native Americans were to us and how different. And they lived differently from one another. Some in Hogans, some in teepees, some like people from Indiana and Illinois in log buildings similar to log cabins," she explained.

"I think I was born with the interest. I have always wanted to know more about it. Strangely, the number seven is my number and that is sacred number of the Cherokee. I think it's my job to teach the generations about our history," she added.