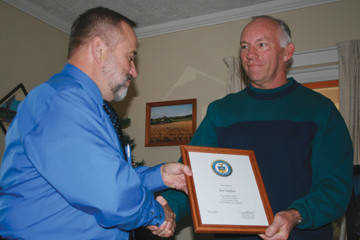 REELSVILLE -- A decade-and-a-half after he first began collecting data for the National Weather Service, Joe Sadler is still a dedicated volunteer.

Sadler was honored recently at his home for his dedication to the NWS Cooperative Observer Program -- an initiative described on the NWS Web site as "the nation's weather and climate observing network of, by and for the people."

"A friend of mine was doing it, and I decided I'd like to get involved too," Sadler said.

The NWS sent him his official rain gauge, and he was on his way.

Sadler, who has worked as a custodian at Reelsville Elementary School for 30 years, is one of more than 11,000 NWS COOP volunteers that take observations on farms, in urban and suburban areas, in national parks and on seashores and mountaintops.

The program was launched in 1890 as a result of the Organic Act. The purpose of the COOP program is to provide observational meteorological data. This normally includes daily high and low temperatures, snowfalls and 24-hour precipitation totals.

These factors are used by the NWS to define climates and to help measure long-term climate changes. COOP program volunteers also provide observational meteorological data in near real-time to support forecast, warning and other public service programs of the NWS.

"I mostly keep track of precipitation, but if there's a severe thunderstorm or something in the area I call (the NWS)," Sadler said. "Most of what I do is through the computer. I punch out a bunch of numbers."

"We're one of the youngest countries, but we have one of the most extensive collections of climatic data thanks to our volunteers," Terrell said. "With all our fancy equipment, it's still the observed data that is the butter on our bread."

There are 250 NWS observation sites in Indiana. Two are in Putnam County -- one in Greencastle and one at Sadler's home in Reelsville.

"The information we get from these sites is used in a lot of different ways," Terrell said. "When the program first started it was mainly used for agriculture purposes, but now it's used for building, infrastructure and research. Pretty much anything we do today can be traced to climatological data."

For more information on the COOP program, go online to www.weather.gov